What do a large phallic object, recycled cardboard, and dancing have in common? They're all featured on the inserts Dominic of Buckeye State sent in trade! This is part four in a series of five, and the post format will change ever so slightly.

First, I'll show you these generally-unloved cards featuring some of the great accomplishments of 2008. Put it in Allen & Ginter as a mini, and collectors want them. Stick them in Upper Deck and they're worthless. Granted, giving a card to the guy who finished the Yankee Stadium Legacy set basically killed the set - that's gotta be the ugliest trading card in the world. (And now that I say that, he's probably going to hunt me down and break my leg or stab me or something. But honestly, dude, just get a haircut.) 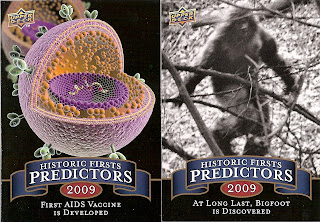 Oh, but it gets worse! The Predictors featured outlandish possibilities. Bigfoot? Gas back down to a dollar? Yeah, right. But these five cards almost finish both sets. I believe I need two more from the Firsts set.

These 2008 USA inserts look better than the 2009s - overall 2008 was a better card design. You know your card photo was taken during a photo shoot when you're catching and there's no umpire. 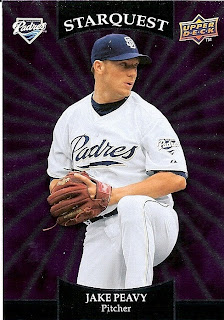 Purple Common completes my StarQuest rainbow. Not of Jake Peavy, just in general. I think there were about 10 variations in 2009. 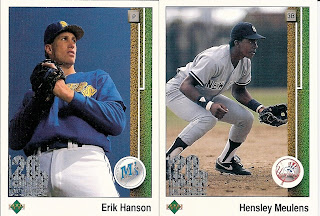 I'm not really that big of a fan of buybacks. What does the foil stamp prove? Are these cards ever really worth more than their original counterparts? But I needed one anyway! Dominic sent two. Nice crotch shot, by the way, Erik Hanson. I don't think you need the Big Gulp cup. You can try the Dixie size sometime. I'm sure you'd be fine. 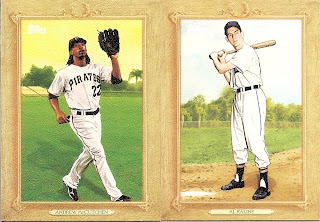 These two cards are the only non-Upper Deck cards Dominic sent, both from the 2010 Turkey Red insert set. amazingly, I've ended up with several of these cards over the past week - some of the series one set and a complete series three set. 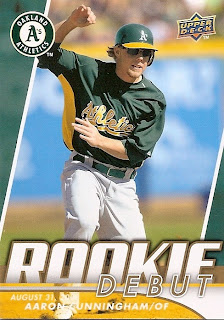 Aaron Cunningham's Rookie Debut insert. He was traded to the Padres before the 2010 season and did well that year, batting .288 in 53 games. No superstar, but those are good numbers. Apparently, his only home run last year was a grand slam, in his first at bat as a Padre. 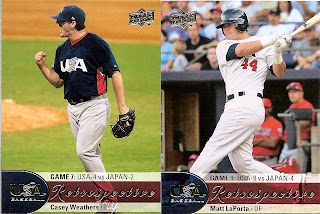 And a couple more USA cards. I like this set because it tells you how the team did, instead of just showcasing tons of USA players as rookie speculation cards.
That's it - later today I'll bring you the last post from this great trade, and explain the title. Until then, happy collecting!
at 11:09 AM