Recent Arrivals from the internets

I'm always poking around eBay looking for stuff to work towards my seemingly infinite collections. Over the past week, I've pulled in three Ultra sets (2000, complete with SPs, 2006, with most of the insert sets included, and 2007), some packs I am saving for posting the week I'm out of town, and the baseball part of the 2001 American Pie set - which I didn't realize I didn't need (I need singles from 2002), but I can use for the cards for the awards/leaders collection. I decided to go with the Ultra sets because I've seen some quality photography on cards I've obtained lately, which I didn't remember from the '90s.
I also picked up some nice stuff: 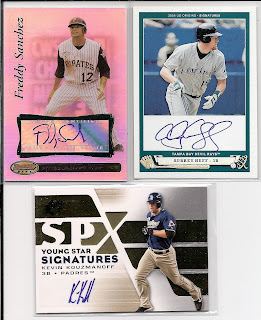 It's amazing how many players for the Giants and A's didn't get their start there. I'm trying to put together small "team sets" of certified autos for the 2011 Giants and A's - basically the starting nine plus starting pitchers. Not so costly for the A's, but the Giants require Lincecum, Posey, and Belt. I think I'm going to do TTM for them and hope I get something back, because I'm not paying $150-200 for an unproven rookie. I've got some sense to me! 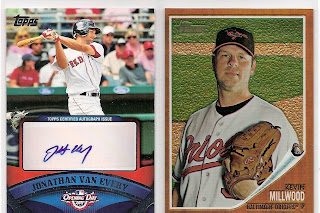 I also picked up a couple 2011 needs for the samplers - the Millwood is a refractor, I think. And the Van Every autograph means I have a sample of every 2011 Topps Opening Day set other than the plates. 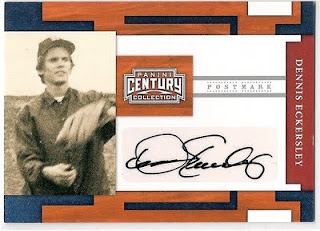 My best pickup of the week is this Dennis Eckersley autograph. He goes in the '89 A's team autograph set. All that's left now is McGwire and Rickey Henderson. Four of the cards I have are IP/TTM signs, and five are certified.
at 8:25 PM