At last weekend's bust of a card show, I picked up a few cheap packs - five '94 Fleer and a '96 Fleer Update. I guess I didn't have enough of '94 Fleer with Colbey's break. This was all in the name of fun, so with the exception of the noted cards, I'm making everything available for trade. 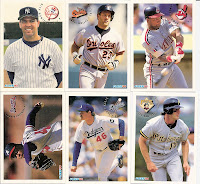 Highlights include ... well, there was a Curt Schilling in the pack, and that Darryl Kile card. Nothing else stands out. Oh, and all the '94 Fleer packs had issues with cards sticking together, so most/all of the cards are somewhat damaged. I'm keeping the Van Slyke and Gross for the Awards/Leaders. 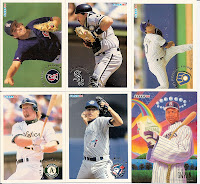 Pack 2: Mark McGwire, Jack McDowell, and one of those beautiful Pro-Visions of Tony Gwynn. I'm keeping the Gwynn. 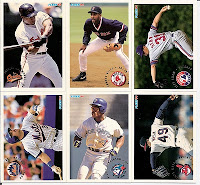 Pack 3: Rickey Henderson, HoJo, and John Kruk as an All-Star. I hated him back around this time - him and the whole nasty Phillies team. I'm keeping HoJo, Rickey, Mesa, and Shaw. 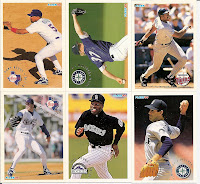 Pack 4: Dave Winfield, a good selection of pitchers, and Will Clark on an insert. Keeping Dave, Kenny Rogers, Eric Young, and Tim Leary. 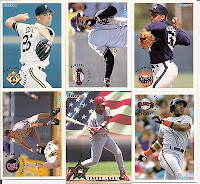 '96 Fleer Update pack: These cards are on a matte finish with full-bleed photos - this is where Fleer Tradition got its start, and probably eventually led to the Topps Heritage line, among others. It's a stark contrast to the high-gloss, white-bordered '94 cards. Kevin Brown is the Tiffany parallel; I also pulled Kenny Lofton, Wade Boggs, Ryan Klesko, and Mike Piazza. I'm keeping Kevin, Mike, and Kenny.