Cards From Cards from the Quarry

The smallest trade to arrive this week (and thus the easiest to post about!) came from hiflew at Cards from the Quarry. I emailed him about my Opening Day extras and he grabbed a bunch for his master set. In return he sent some of my set needs!

He included two right handed national league hurlers for my 2011 Topps set - Daniel Hudson from the D'Backs and Brad Lidge from the Phillies. I still need one more card from this set - #24!

I have also now finally started collecting the 2010 Turkey Red set. I believe the nine cards hiflew sent are the first for me, though I think the third series is on the way. 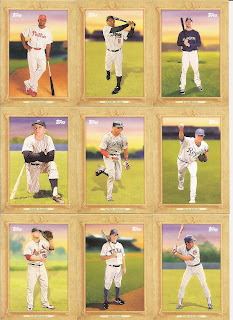 It's a great selection of players from the first series, too, including Ryan Howard (is he still hot?), Ryne Sandberg, Ryan Braun, new Giant Miguel Tejada, and even Mickey Mantle!

Thanks again for a great trade and I hope we can do business again soon! I've got two large trades to post about, but I'm going to save them for next week. It's going to take a while to sort through and scan all that goodness!
at 2:48 PM