I just finished posting about my 129 card trade with Dominic, which given that most of the cards were inserts, seems pretty big to me. But my trade with Ted of Crinkly Wrappers has that beat, big time. No, really. He sent me a nearly-full 500-count box of cards. I think it's a 500-count box. Anyway, the deal started with him offering some '09 Upper Deck and '11 Topps, which are the two sets I'm focused on the most right now. He also noticed my quest for one card from every set, and sent me one card from every set he had extras from - which was a ton of cards. A 500-count box full.  I'm going to spend the next several days giving you a glimpse into the past 30+ years of baseball cards.
All this came for the exchange of this. I probably got the better deal - I certainly didn't expect what he sent!
First, a little bad news to Ted - I think I only needed one of the cards for my sampler collection. But I still like these cards. In fact, I have a use for them, because there is another sampler project I was considering undertaking, and these cards actually put a massive dent in that project.
For each brand, I've selected a few cards to discuss - the best and worst designs represented, really. So here we go!

So, we start with Donruss. The '84 design is better than the '81-'83 designs. It's fairly simple, but I like the elegant swoops holding the team name. It doesn't help that this is one of the rarest sets of the '80s. And dude, that's Don Sutton. Mr. Talks-a-lot himself!

For years, I never paid enough attention to the '87 design to realize those were gray baseballs. To this day, the card design reminds me of a small car tire rolling over every card. The '89 set marked my entrance into collecting. I actually don't mind the design, even though it gets tired after seeing 1000s of the cards.

I really liked the 1990 Donruss design. Overproduction at its best, but I like the artsy style of the paint splashes along the border. The 2003 card to the right is a big improvement, but we're talking 13 years of innovation. I think the design would work as an Opening Day type of set, or an insert, but otherwise the borders take up a bit too much of the card. 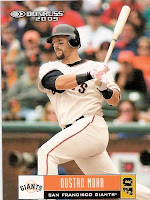 2005 was the end of Donruss in baseball. They featured a simple design - all the basics in a box on the bottom with plenty of room for the card. Not much design work involved, but overall I think Donruss never really tried to do anything innovative or spectacular.

Leaf was limited in its 1990 release, but it wasn't until 1993 that it actually reached the quality of Stadium Club, Ultra, and of course Upper Deck. I liked the marble design, and I've been a fan of Eckersley since I started collecting. Ted included an insert - this Gold Leaf Rookies card of A-Gon.

Studio was Donruss's attempt at, well, a studio approach to photography. Over the years, you can see a shift back and forth from that concept. The '91 set, a weekly feature on Baseball Card Bust, features some groundbreaking photography, even though it can be quite scary. The 1993 card to the right features up-close images but in less of a portrait format. The stitched logo backgrounds are nice. 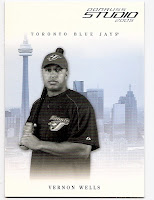 The '95 set went nuts. The entire set was produced to look like credit cards, even featuring a black line mimicking the magnetic strip on the back. Again, you see that game photography was used. By 2004, Studio returned to portraits, as you can see on this Delgado card. I like the use of the city skyline in the background. I noticed another Studio set used this imagery on the back of the cards. And you can see the same imagery was used in the 2005 set, just with a hazy backgroud. By the way, last year I visited Toronto and went up in the CN Tower. A rain shower passed by as I was up there and I got a couple really nice pictures.

If there's one thing Donruss did with baseball sets in the 2000s, it was produce a lot of them, and they were mostly focused on relics and autographs. The Leaf Certified Cuts issue was named because the big sell was cut autographs. Donruss Champions was designed with plenty of room for relic pieces. This could have been why Donruss lost its license - less focus on the card and too much focus on the hits. That left base cards like the two shown here with way too much empty space. 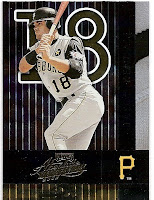 Absolute Memorabilia was a little different, at least in this 2002 card. The base cards weren't designed for relics first, and the design isn't bad. Of course, the whole point of Absolute Memorabilia was memorabilia cards, but it's one of my favorites in that category. It's too busy for a regular issue, but it works for a specialty set as this. To the right you can see a Leaf Century Collection, which featured stamps embedded on some of the cards. Again, for its focus, it's a decent design.

That concludes the Donruss section of the post. I didn't show you everything - there are Triple Play cards, other sets you probably forgot about, and tons more cards from Donruss, Leaf, and Studio. Next, we work the alphabetical manufacturer order with Fleer.
at 10:50 AM