I had Nachos for dinner!

One more quick post for today, as I try to clear some stuff out of the way. Chris of Nachos Grande once again had a trade stack I jumped on, including these fine subjects: 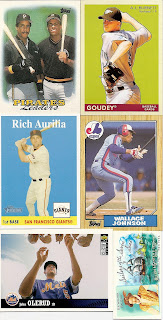 There's a nice selection of players there. Gotta love the 'stache on Barry. That is Barry, right? I've seen him looking so much like Peter Griffin (what with the thick neck and all) over the past few years I don't really recognize him in his skinny days. And I'm going to add to the commentary by saying, hey, he did pretty well as a skinny dude. Didn't he win a couple MVP awards and hit a couple hundred homeruns with Pittsburgh before he ballooned in size? And this is like the sixth mini Chris sent to me. But those cards aren't why I pulled the trigger on his trade stack. This one is: 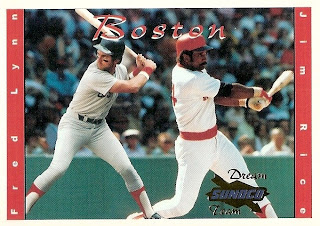 Oddball greatness! If he had started with this card as the trade stack I would have still made the trade. These are the cards I have a hard time finding, or if I do they cost way too much to order individually on eBay. So I don't really look for them, I just grab them when I see them.
Thanks a ton, Chris! I have now broken the 17% threshold on the sampler collection. That's 5436 of 31899 cards! If I ever reach 50% I'll be really surprised, given the difficulty in securing these oddballs. And yes, I really did have nachos for dinner.
at 8:38 PM