Going Postal 4: A Bunch of Firsties

I watch too much G4. About an hour a day - Candace Bailey and that guy on Attack of the Show. And I watch Web Soup. That's enough G4. If you watch G4, especially Web Soup, you know where that term comes from.

It's appropriate because this week marked several firsts in the arrivals bin of my garage door.

My first tint variation from Heritage. It's green, and for a team with green colors. How appropriate. This came from the Bay. 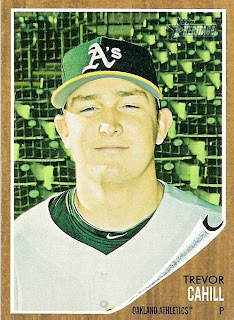 And my first Then and Now from 2011 Heritage. (And what should be my only.) This came today courtesy Derek of Tomahawk Chopping, but it wasn't my first trade with him. It is, however, the first time I've received a trade before I had a chance to mail my side of the deal. Let's hope that doesn't become a trend. Derek, thank you very much, and your goodies will go out tomorrow! (He doesn't know what he's getting yet, so I'm going to let it be a surprise. Hopefully he likes it!) 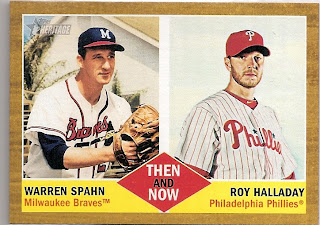 My first prize arrival. From The Adventures of Napkin Doon - that was a really cool contest and I hope I can play again! It's coming up on the time for me to do my first contest. I think that'll happen next month... I should have traded for the autograph or picked a different number. These are great cards, but I missed out on an awesome HD die cut card. And I don't think I need them, so they will unfortunately have to be trade bait. Unless I decide to frame them and put them on the wall. I do like leaping Ozzie.

My first (and only) autographs of these guys: Ryan Sweeney and Daric Barton for the A's collection, and Pat Burrell for the Giants collection. I used to dislike Burrell because he played for the Phillies and I'm a Braves fan. I think he hit a home run or something against us once. But here he is, now, in my autograph collection. Go figure. All these are eBay finds.

My first Blue Jays team issue cards. I picked up a lot of these 1993 McDonalds cards. Most of them feature Great Moments, and most of those feature the 1992 World Series win over the Braves. There are some player specific cards like the Olerud too. I like the McGwire-cameo card. It looks like Stretch Armstrong there is punching the catcher in the face. While on his knees. McGwire's a big guy. And that catcher is tiny. Sorry, I'm not a Jays fan so I don't know who that is. I only really want one of the cards for the collection - I'll keep the McGwire card, so the rest are for trade, Blue Jays fans! I know you're out there somewhere. Watching. Waiting.

My first Joe Buck card. I guess I'm stretching the theme here, but Joe Buck finishes my "non-player" collection from Fan Favorites '04. I picked this up while working towards finishing my '06 and '99 UD sets on Sportlots.

My first 1994 Topps Pre-Production cards. Again, stretching a good bit here. I would have said "my first Topps Pre-Production set" but I'm missing Wade Boggs and Nolan Ryan. There are actually three Nolan versions based on orientation and card number in this set. So I'm four cards away from a master set. Whoop-dee-doo! 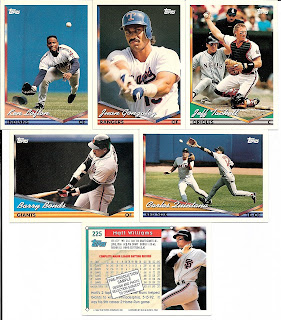 My first completed parallel rainbow. All the other cards are in a box in Georgia, but this Carlos Lee #/5 finishes the 2006 Co-Signers rainbow. There are 12 cards to the rainbow, not counting the fact that each card has three variations (based on the second player). Not all the cards are Carlos Lee, in fact, I'd be surprised if I have two of the same player. Someday I'll put together a nice rainbow of a single player. 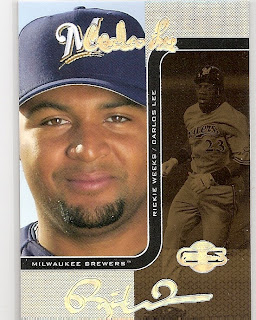 Last, my favorite arrival this week. My favorite collection is the one that contains my autograph and relic cards. I don't talk about the non-baseball side much. I have 138 relics and autographs from movies and women in sports, ranging from Alicia Silverstone to Drew Barrymore. In fact, I also have several complete pieces of wardrobe (tops, jeans, full outfits) from several celebrities. One very elusive celebrity has been this elfish darling I've been a fan of since I was a kid - Natalie Portman. I know she's had some cut autographs in a couple releases, but this is her first attainable relic, from the movie Thor. 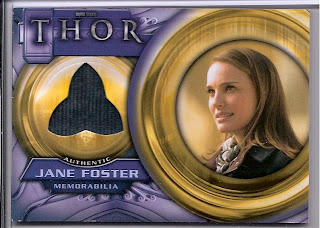 Left on the movie want list without cards is Jennifer Connelly, Rachel Bilson, Zooey Deschanel, Kate Hudson, and Reese Witherspoon. On the sports side with cards is Sasha Cohen and Nastia Liukin (she's on the list just because she has a card). And on the actor side (Pop Century cards) - I'm listing them here more for myself than anything else - Jack Black, Tom Hanks, Dustin Hoffman, Bill Murray, Adam Sandler, Lea Thompson (autograph), and Wierd Al Yankovic (autograph). Elizabeth Banks was in Spider-Man 2's autograph list but usually goes for way more than I'm willing to pay.

I'm about to grab dinner (it's 9pm) and get back to this list of stuff to get done by the end of the day tomorrow. Have a good night!
at 9:02 PM