Welcome to the second-largest trade I've done yet! I still have less than a dozen trades under my belt, but I'd say this ranks up there with some of the larger trades I'll end up doing this year (other than possibly trading for complete sets, of course). The instigator of this trade is Dominic, who runs the fairly-new trade blog Buckeye State Cards. A few weeks ago, Dominic emailed me a list of about 50 cards that had to offer, which ended up ballooning to 129. All this week, I'll be treating you to commentary on many of the cards he sent, starting with the base cards, and working my way up to the hits!
The trade focuses on 2009 Upper Deck. In fact, that's almost all he sent! But that's perfect, because he is a big help towards finishing the set. Here are some of the base cards he sent:

Conor Jackson, at what appears to be an Astros game, which would put Carlos Lee behind him as baserunner. The D-Backs only played the Astros three times in Houston in 2008. Conor played in none of them. He did play in two of the three matches in 2007, Friday 5/11 and Sunday 5/13. The Astros jersey appears to be a Sunday alternate version. Carlos Lee reached first 3 times that day, so this could have been any of those at bats.

All the hitters like to lean a little to their left...

Where's the ball? I think he missed. Or maybe he already hit it, or it's really inside. How many ballplayers wear sunglasses while batting? 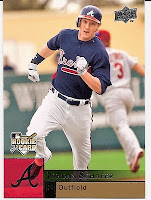 One of the two 1000+ card-number rookies Dominic sent.

The other - and this is a great action photo. Nice plug on the billboard, by the way. Too bad your entire business and the end of your phone number is blocked. However, that is a Florida area code, and the Indians don't have a Florida affiliate, so this must be spring training 2009.

Colby signing autographs on a beautiful day. I like the angle - but I bet it wasn't planned. Perhaps the photographer was in that little pit next to dugouts and Colby wandered over to sign some stuff, and he just turned around and snapped the picture.

Justin Morneau sporting his 2008 All Star Home Run Derby trophy. Since I don't pay enough attention, this is the first time I actually saw a HRD trophy.

And finally, Chris Waters says, "I have two baseballs! How cool is that! But what am I supposed to do with two?"

That's all for this first post, and thank you to Dominic for this and all the other cards that you will and won't see this week! Tomorrow I start showing inserts!