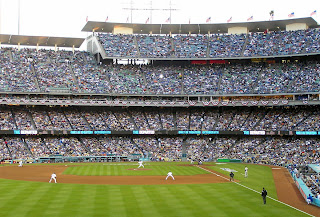 This marks my 100th post. I was thinking, as I approached this number, that I would do something totally awesome, but it isn't going to be the case. I'm preparing for my road trip, and I haven't had time to put anything special together. I will tell you a little about my trip, though.

I call it a road trip but really I'm just heading down the coast to the LA area. I'll be seeing a lot of the sights - both Getty museums, the Music Center, etc. I'm catching a game with the Dodgers, Angels, and the Padres, in addition to the six(!) minor league teams in the greater LA area. I have plans to also tour Dodger Stadium and Angel Stadium. I toured Petco Park when I spent a week in San Diego in December. In addition to museums and such, I'll be visiting a few filming locations, like the high school used as Sunnydale High in the Buffy the Vampire Slayer show. And I'll be hitting some important baseball locations. I'll be saving those for my return.

I've been to Los Angeles twice before on week-long trips, and spent an additional day there on the way back from San Diego. This should almost finish everything I want to do in LA.

While I'm gone, I've prepared some quick pack-busting posts that start tomorrow. I'm sure you'll enjoy them if you're into that sort of thing. And then I can share a few more of the thousands of pictures I've taken. (Yes, I took all these photographs in the LA area.)

Derek and Scott, your packages went out today. Hopefully they find you well. And for anyone else I'm working on trades with, I'm going to follow up any emails tonight and I'll try to keep up with emails while I'm gone. I'll finalize anything we need to do when I return.

Last, but not least, thank you to all my readers out there, all 15 or so of you! I haven't been around long, but I've enjoyed every minute of it so far. I know not all my posts are hard-hitting journalism at its finest (are they ever?) but I try to bring a bit of interest in there.
at 5:17 PM