Idol cards continue to be a big thing in Japan, but I gather that they had their peak about 10 years ago. And just like any other trading card release, the hits are the big draws and the justification for high pack prices. Autographs and relic cards are common, though these card sets also can include kiss cards and polaroids. "Cheki" cards are quite common in idol sets, and even the women-in-sports set Real Venus and the recent JWBL release by Epoch included chekis. On the less-rare side of the spectrum, in addition to regular base cards, most releases include SP cards as part of the regular set or as separately-numbered insert sets and foil or facsimile autographs.

Yuko Ogura is my focus for idol cards, and I've gathered a few rare cards of hers. I have a framed photo (a premium given to purchasers of cases or large numbers of boxes), autographs, and a cheki. And of course some costume cards, like the newest addition below. 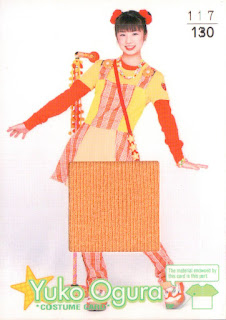 Cards usually indicate which part of the wardrobe the relic comes from, and sometimes (like here) which part of the piece (this is the top portion of Yuko's shirt). For certain pieces of wardrobe (swimwear/underwear), the location is even more specific. 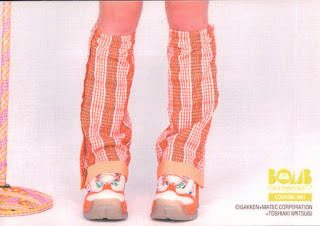 This is Costume 1, and as you see the back is a puzzle that should take up three cards. A full set of three cards would then include the full outfit (actually, just the shirt). Bomb is a common brand for idol cards; many idol sets don't include issue year but a little research can help. I know this is from the 2002 set, and is not my first from the release; card 3 is the bottom of the shirt, indicating that card 2 will be the middle. I also have three other cards from the at least 8-card set, meaning I need (at least) three more for the full costume set. Oddly enough, I don't have the base set but I do have the framed signed photo and a special box loader card.
at 3:00 AM