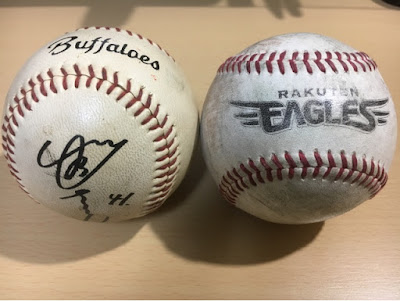 One of these balls isn't a gamer. Which one do you think?

The Buffaloes ball is a facsimile. It has a little wear and tear, but it ain't real. Well, it's real in the sense that you can touch it, hold it, and throw it. But it never touched an NPB field. It does have some wear and tear, though, either from use or poor storage. The biggest giveaway here is the excessive shinyness giving it away as not having a real leather cover.

The Eagles ball might be a gamer, or could just have been a practice ball. But it has a more matte finish from use, and just feels right in the hands. Sorry, you can't hold a ball through your computer screen. And even if you could, I wouldn't let you. I know you just ate chocolate and have messy hands.

I have a lot of game-used balls, though I've never gotten one at an MLB, NPB, KBO, or CPBL game. I bought an authenticated MLB game-used ball at a Cardinals game, I think. And I've gotten plenty of BP balls that essentially started their life in a game. My KBO balls came from batting practice. And I don't have a CPBL ball yet. I have a handful of minor league balls that I got in-game and a couple BP balls there too.

Oh, to have more weeknight free time, and attend more NPB games...
at 3:00 AM