Starting the Year Off Right: Ripken Autograph with Zippy Zappy!

It's a bit sad to say that one of the reason I've been able to get back to blogging is that I didn't make plans for my New Year's vacation. I had considered going to Vietnam or spending time taking trains around Kyushu, but in the end my plans were to have no plans.

That's not to say I've done nothing. Vacation for me started on the 28th, but the 25th and 26th of December were spent in Nagoya. I blew my Christmas budget at the monthly card show and a couple card shops on the first day, and spent Monday having my usual fantastic time at Nagashima Spaland. Seriously, I love that park. I could live at that park.

My actual vacation week has been spent generally walking around, exploring the Tokyo area. I went out to Yokohama, took self-guided walking tours around Tokyo Station, Minami-Senju, Arakawa, and Nippori, and spent one day in Utsunomiya. And there have been a few stops at card shops, too, generally browsing but also picking up my Time Travel set.

On January 2nd, I met up with Zippy Zappy, which has become sort of an annual tradition. I give him a tiny package of generally worthless cards, and he unloads a ton of stuff on me. It's really not fair.

I'll get to his great stuff in a few future posts, but first, let's look at the card shop pickups from that day. 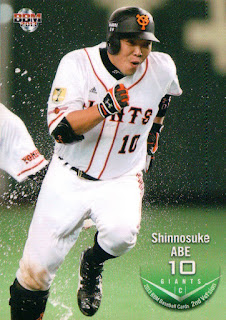 What, a regular boring card from 2013 BBM 2nd Version? Well, I bought the whole set. It looks like I'm going to eventually try to get all of the BBM sets. I have a few already, but it's not a priority right now. 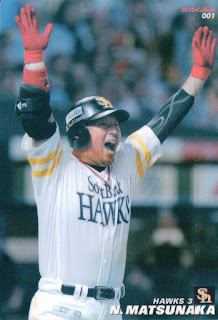 And this 2012 Calbee card? Yeah, I found an awesome deal on a complete set (with Star Cards!) so I grabbed that too. That gives me about three or four years finished on Calbee. Unless my money situation changes, I won't go for a set run of Calbees. How cool would that be though? I'll probably just go for around 1998 to present - the easy years.

Both of the sets above came from Mint Ikebukuro as part of a New Years sale. Coletre was closed, so after Zippy Zappy met up with me we headed to the Shinjuku Mint store. That's a store I visit maybe twice a year - if I dig I can usually find some good cards but as you'll see I didn't buy a single Japanese card there. 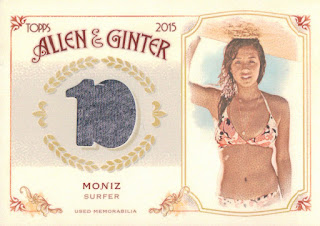 Instead, I got a surfer relic. I thought I had this, but I checked my list and I didn't. 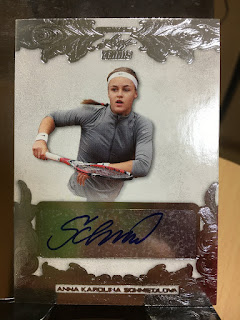 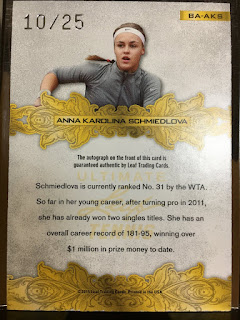 And this low-numbered Tennis autograph. 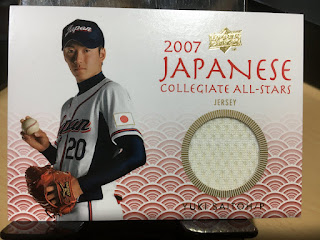 Mr. Zappy remembered that this store keeps some relics and autographs in binders and boxes behind the counter - display space is limited - so as he was browsing I saw they had cards from the 2008 Upper Deck Japanese Collegiate All-Stars jersey set. And I saw they had Yuki Saitoh, the one last card I needed for the set. The one that was listed (and sold) on COMC for over $20. And I got it for 1000 yen at Mint Shinjuku. Score! While most relics in the set aren't that expensive (Saitoh is the only player to really make a name for himself), it's a pretty sizable set, and it's the first relic set I've ever completed! And it brings me one small step closer to 2017 goal 18: get my set want list down to 125 sets. 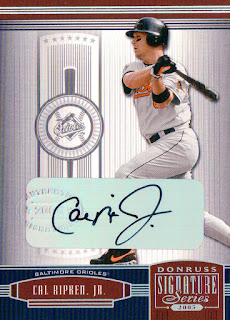 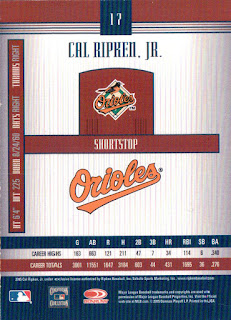 But I made one more purchase that really made this a good shop visit. The Cal Ripken autograph above may not be numbered, but it's a certified Ripken autograph that I got at a great price. And that brings me 1/3 of the way to 2017 Goal #16: get three Player Collection autographs! I might try to meet that goal this month.

Zippy and I hopped a train back north, checking to see if Quad Sports was open. The shop has no website, so the only way of knowing (other than calling, but we didn't think of that) is to show up. They were closed for the holidays, so we went back south around to Shibuya, to the high-class Mint location there. They have a bar, so you can have a drink while busting boxes. Shibuya Mint is the high-end store of the chain, though prices are about the same. 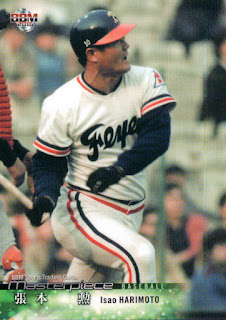 My cheapest purchase that day was this Harimoto card to help with my Japanese awards collection. 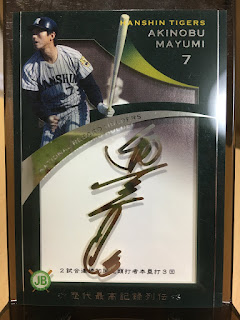 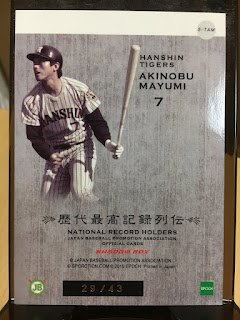 I got three Epoch shadowbox cards for my type collection. This Akinobu Mayumi one is from the National Record Holders super-premium set, with a facsimile silver autograph. It's numbered out of 42. 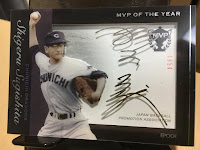 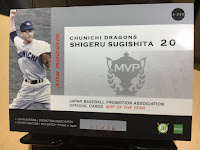 Next is Shigeru Sugishita from the MVP of the Year super-premium set. It's numbered out of 38 and has a silver signature too. I'm sure there are multiple foil colors for both of those. 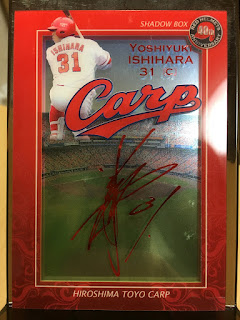 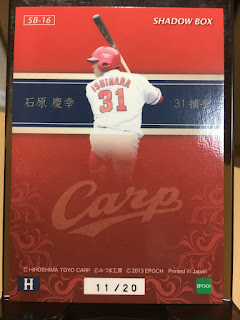 This last one is from the premium Carp "Red Hell" (actually, Red Helmets) box set Epoch issued last year. It's a parallel numbered to 20, with a red foil facsimile signature. The easiest version to find has a gold signature.

I've also seen actual relics inside the shadowbox for some of these cards, and many of them have beautiful patches. And they cost a fortune. So for now I'll just take the foil signatures.

That was it for my purchases with Zippy Zappy, but I went home with a backpack full of stuff. What did he give me? You'll just have to wait.

Until then, enjoy this picture of my first Taco Bell in Japan. It's across the alley from the Shibuya Mint location. 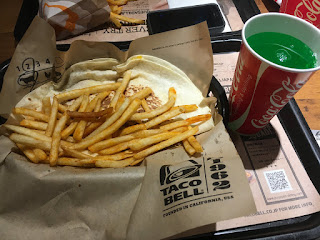 There's a fajita quesadilla under the fries. That quesadilla was great, but the fries tasted old and soggy. Next time, I'll get the nacho chips as a side.
at 3:00 AM