Last year, Calbee surprised collectors with a couple topical sets which book-ended the company's usual three-series annual release. Early in the year, they dropped an "All-Star" set featuring some of the game's current greats (though not really related to the NPB All-Star Game). And after the season ended, this set came out. 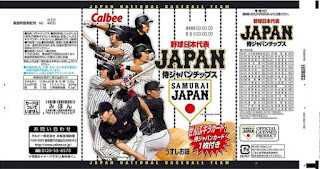 The Samurai Japan set features the national team, with some caveats. The manager (Hiroki Kokubo) and 35 players are featured, putting the set size at 36. All of the participants in the Premier 12 or games against Taiwan last spring are featured except Kenta Maeda, who was probably excluded due to his now playing in the MLB and not having a card contract with Calbee (for whatever reason). And my guess is that this set is a pretty good representation of Samurai Japan for March.

Here are all of the cards:

Some of the biggest names in the NPB are included, including Ohtani, Tsutsugoh, and Sakamoto (many of my Yomiuri Giant fan students like him).

As NPB Card Guy mentioned in his post, these cards use the same kira (sparkle) finish found on the Starcard inserts. For those of you who have never seen BBM or Calbee do this finish, it's very similar to Bowman's cracked ice parallels. I believe it's that nearly-invisible holographic foil finish that ends up causing the ugly snow effect when these cards are scanned. 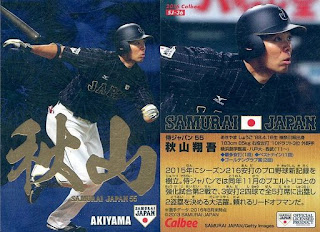 Additionally, a gold foil parallel was randomly inserted in packs. The "signature" might be provided by the player, but it is in calligraphy form, not the usual signature format that a player might use. And given that fact, and the lack of stylization, either the players write their names with calligraphy brushes, or (more likely) it's just a font or work done by a calligrapher. I have one (not necessarily this one) in my type collection. The above image shows you the back of the cards, too.

I'm with NPB Card Guy: I don't like this design, or more specifically, that Calbee has basically copied their Starcards design for both the All-Stars set early last year and this set, issued in November. But I am happy to see a Samurai Japan set issued in Japan, as most (nearly all) of the Japan National Team cards since the WBC started have been issued by Topps or Upper Deck.

Perhaps Calbee or BBM will issue another set in March that correlates with the 2017 WBC. Unfortunately, I doubt I'll be attending any of the first round games. The schedule is during the week and during my class hours; getting a day off (March 8's double header would be perfect) is not very possible.
at 3:00 AM