Calbee Through the Years: 1981

From here, it's pretty easy.

Calbee settled down this year, and there are only a few quirks to the 1981 set. 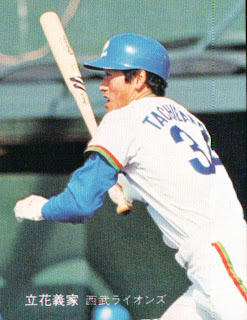 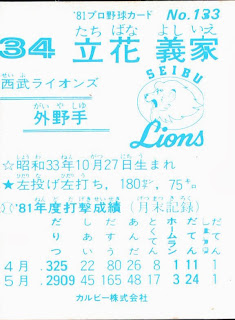 Calbee stuck to the "smaller" size card that it switched to in 1980. As with the prior year, the top line holds the card number and the issue year, making it very easy for collectors to quickly identify the set.

The fronts of cards in this year's issue have the player's name in bold print, followed by the team name.

Cards 1-50 were issued with pink backs, carrying over from the 1980 set. Cards from 51 on have a blue background as you see above. This first series has a banner team logo near the top back.

Cards 51-200 look like my example above, with a team logo near the top. You can see that by the time that (what must be) the fourth series  was released, stats were available for April and May. I'm going to assume that cards were issued in 50-card series again, due to the numbering of the set's subsets. So that means cards 51-100 were series two, 101-150 series three, and 151-200 are series four, probably issued around July.

Cards 201-250 are All-Star cards, Instead of the player's team on the front, they are identified as belonging to the Central League or Pacific League. Backs have a blue banner with "'81 All Star Game" in English, and statistics are for the All Star Game instead of regular play.

Following the 50-card series formats, #251-450 would be four more series: 251-300 series six, 301-350 series seven, and 351-400 series eight. Statistics on the backs of cards point to this being the case, with notations of statistics through August 6, August 19, and September 24, and some cards with no statistics at all. I haven't been able to study this in detail to confirm this remains consistent in a series, but I'm pretty confident so far.

Cards 401-425 highlight the Japan Series between the Nippon Ham Fighters and Yomiuri Giants, so all cards feature those teams, and the photos all appear to be from the Japan Series. Backs have write-ups.

I'm not sure if there is any particular theme to #426-450.  Cards have what I think are full stats from 1981 or a write-up, and follow the standard design of the other series.

Some cards don't feature specific players; this is standard for Calbee. Of note is number 378, with a photo of the Giants winning the Central League pennant, and 399, again of the Giants celebrating. Card 400 is one of several featuring Suguru Egawa, who won 20 games that year.

I know of one variation. Card 314, featuring Roy White, has two different photos. One is just of White's face, in a very close crop. The other is of White sliding into a base with a Hanshin Tigers player leaping over him - most likely this is second base at Korakuen Stadium. The Tigers version is shot from behind White (which would be up the first base line) so the picture may have been changed to feature White's face. I personally like the action shot better.

The one prize this year was a card album with yellow fronts and backs and a white spine. "'81" is included in the text on the spine and front; the photo on the front is of Koji Yamamoto of the Carp hitting a baseball.

Of the 450 cards in the set, 445 can be attributed to single players. Some interesting statistics on the set (in Japanese) claim that 92 players appeared in the set, meaning that each player got 4.5 cards on average. 160 of those cards were Yomiuri Giants! Players for the Giants received up to 19 cards in the set. Complete team numbers:


(Update:)
After initially writing this post, I checked a few shops for cards of the different subsets to add to my type collection, and to verify firsthand the information I got online. I was unable to locate any cards at all from #1-50, the All-Star subset, or #401-450. This is a preliminary search, but it included Mint Ikebukuro, which has a pretty good Calbee selection. I didn't check their showcase cards, but I was surprised that I couldn't find any in the boxes.
at 3:00 AM