Calbee Albums from the 1970s

Recently, I mentioned that I picked up a couple Calbee albums. At this point, I bought these two weeks ago. But here they are for those of you who might be interested: 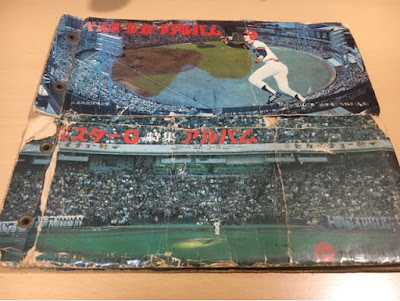 I told you I got them cheap, and here's why. They are, shall we say, well-loved. I don't know what was sitting on top of that album on the top, but there is very little fading only in that center-top part. Both are fraying pretty badly but are intact. 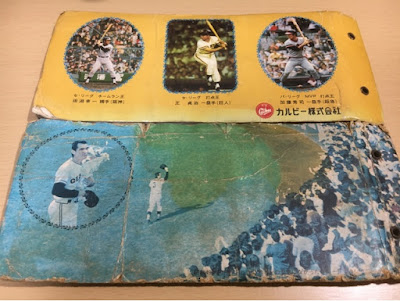 Here are the backs. The top album is one of two card holders issued in 1975. There was also a pocket book of some sort released that year. The bottom album has Nagashima on the front and back, and dates from 1974. Three card holders and a pocket book were available as prizes in '74, and this is my first prize from that year. Speaking of that, I have 22 prizes now, of the 66 issued to date that I know about. I'm one-third of the way to a full set! 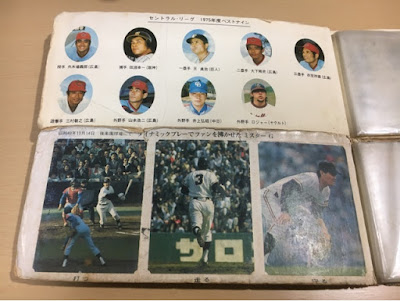 Here are the insides on the left... 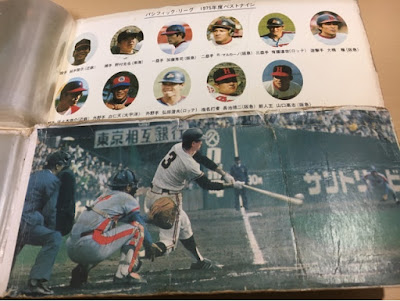 And the insides on the right. The 1975 binder (top images again) has the Central (left) and Pacific (right) Best Nine. The Central had only nine players, one per position. But the Pacific League has 11 - they usually have a DH (starting in 1975) and there must have been a tie in 1974 ... (checking) ... nothing shows. And I'm too lazy to figure this out right now. I'm sure NPB Card Guy will chime in if he knows anything!

And there's another photo of Nagashima here. He had just retired at the end of 1974, but managed the Giants from 1975-1980. He brought the Giants to their worst record ever in 1975, though, and only last place finish, with a .388 winning percentage. He did give them two Japan Series appearances in those six years, though they didn't win either time.

It's not terribly hard to find album prizes from the early 1970s, and if you're willing to get a less-than-perfect example they aren't too expensive - a few bucks, usually. The 1980s are another story.
at 3:00 AM