Calbee Through the Years: 1980

After the insanity that comprise the 1977-1979 Calbee issues, 1980 is a cake walk. Actually, this is the first year Calbee's release becomes a one-year set. Starting with its initial release, Calbee's 1970s sets overlap years and/or have confusing or non-existent numbering schemes.

The 1980 set is numbered straight from 1 to 296, and was issued in multiple series. This year is notable due to the change in card size, a change that occurred in the middle of the year, literally in the middle of a series. Also found consistently from this point on is the issue year. For all 1980 Calbees, the year is found at the top, centered on the same line as the card number. 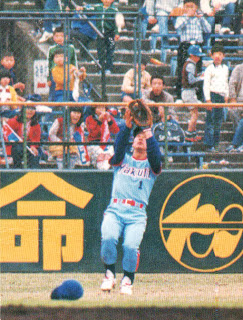 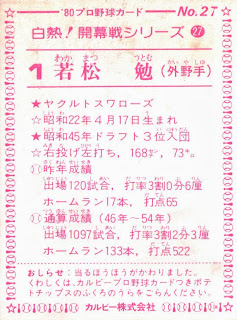 Cards 1-48 are part of Series 1, whose title can be translated as "Opening Series". All cards in this series are "large" size - the same size as the 1970s issues. Series 1 cards have the notice at the bottom. My sample card has an alternating baseball/bat border, though versions exist without this border. Note the "pure" card front here. 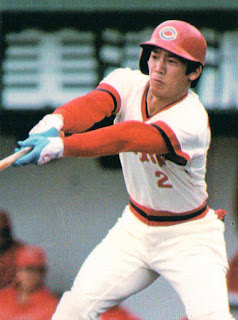 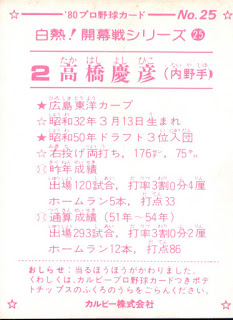 Here's a first series large size card with no border for comparison. 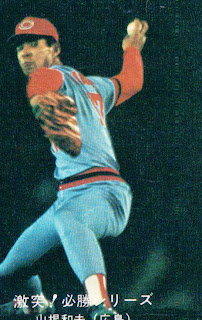 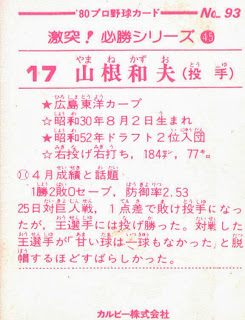 Series 2 (#49-96) comes in two sizes, and could be called the "Winning Series". My scanner didn't like the dark photo on my sample card, so part of the front got cropped off. The first size is the same as Series 1, while a smaller size was also produced. Small size cards will be issued for about a decade more. The series name is found on the front on the top line; the player's name and team is on the second. 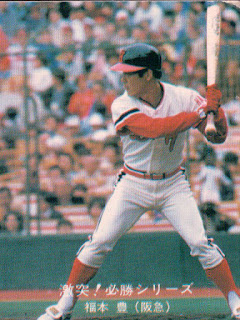 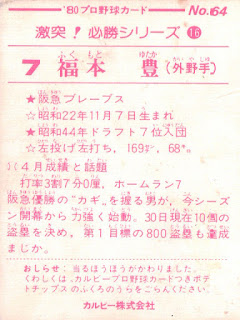 A variation exists in this series as well. Larger size cards all have the same notice at the bottom as found on the Series 1 cards. Smaller cards were printed both with and without that notice. I should note that the larger and smaller versions for any particular card are identical except for size - the photo and text were shrunk down proportionately. Above is a small card with the notice.

The third series (#97-146) comes with its own variations. The title of this series is Middle Game Series, and can be found with black backs in addition to the regular pink backs. I've never really looked for any, but I don't recall seeing a black-backed 1980 card. I'll have to pay attention next time I'm around vintage Calbee. The backs of these cards have team flag logos at the top. The fronts again have the series name as well as the player and team.

The All-Star Game Series is the fourth issued, numbered 147-196. Instead of a team flag on the back, a league flag logo is centered at the top of the back of the card. And the fronts contain only "All Star Game" in Japanese; no player names are given on the fronts, though backs do identify the player.

The remaining cards, numbered 197-296, aren't identified as a particular series. Given the way the first four series were issued, I'm going to assume these were issued in two series (#197-246, 247-296). This would put it in line with Series 2, 3, and 4 in terms of series size (50 cards). These final 100 cards have team logos in the upper left corner on the back. The front text includes the player's name and team at the bottom.

Homerun Card holders could receive one of two albums as prizes.

The first type is yellow with no date identification. The front has a red banner with white text that reads "Baseball Card Album" in katakana with a photo of a Giants player (Oh) batting; another Giants player and the opposing catcher are visible in the photo.

The second type is much easier to identify, with "Baseball Card Album '80" printed in English on the front, and "'80" in big print on the spine.
at 3:00 AM