The Summer of '69: Cut Signature

In an Astroworld of his own. Managing to add another cut signature to my collection. Astros Hire Baker to Cook Up Another World Series Victory. unHistoric Autograph. All other bad titles I could have used for this post.

I'm about a year too late on this post... but here we go.

Fifty one years ago, some great things happened. Woodstock. Man on the moon. The Mets won the World Series. I don't know what it was about that year, but it certainly was a turning point in American society.

I wouldn't enter the world for another decade or so, but it was hard to avoid the history that defined my parents' generation. Thanks to Woodstock '94, I learned about Woodstock '69. And in school, we heard about all the turmoil and trouble. And of course, plenty of TV shows waxed nostalgic about the era. The Wonder Years, for example.

Historic Autographs is one of a handful of companies working on the fringe of the "respectable" baseball card world. One step above Broder sets, but not even equal to Panini, and far off from the juggernaut that is Topps. Their sets don't even end up in my database. But I'm aware of them. And while I never chase their cards, I'm certainly fine with them making their way into my collection if i come across them.

At the card show on Sunday, one seller had a few cut signature cards from the set for $2 each. So now, I have this: 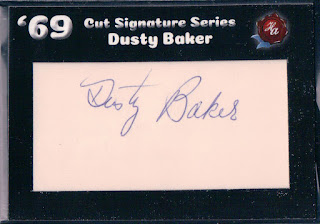 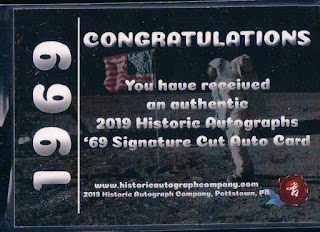 Dusty Baker never walked on the moon, but he did manage the Giants when I was younger, and after a two-year retirement from the field, should return to the diamond (or, at least, the dugout) this season to manage the Astros as they try to earn back some respect. Baker was 20 years old and playing in his second season in Atlanta in 1969; his best years as a player would come around 1980 with the Dodgers, though his years with the Giants are probably his most successful.

This card heads to my Giants collection, a small group of cards mainly commemorating the 1989 team, when I first got into baseball, went to my first game, and started collecting cards. Baker was the hitting coach for the Giants in 1989, and while I wasn't a huge Giants fan in the 1990s (Go A's!) I certainly respected what he did.

What would make this purchase even better would be the Astros winning the World Series in 2020. Baker has never managed a team to a World Series victory, though he was one victory away in 2002.

Dusty Baker is only the third manager to have a certified autograph added to my personal collections, after Tony LaRussa and Bobby Cox.

I would like to add Bruce Bochy, Tommy Lasorda, Casey Stengel, and Sparky Anderson. Bochy has no certified autos, and only one relic card, I believe. Lasorda's autos are a bit pricy, but relics are affordable. Ditto for Stengel (autos are way too expensive) and Anderson. Maybe later.

Dusty Baker isn't my favorite manager, but he's definitely up there. I'd probably have to go with Bobby Cox over LaRussa. LaRussa has more victories, but Cox presided over a longer dynasty and was just more interesting. Plus, he had a better winning percentage and has the all-time record for most ejections. Bobby Cox is one of my "player" collections (as a manager), but for now LaRussa isn't.

Who's your favorite manager? Do you have cards for him?