Two Vintage, Not Too Vintage

I've recently come across a couple cards I need for my type collection. That's not so strange - there are hundreds of singles in any shop's showcase I need, though they're usually priced higher than I'd like to pay. And tons on Yahoo Auctions, but I'm not scouring through thousands of listings at this point.

But something pops up in a random search, or some card catches my eye, and I end up with a card that's eluded me for the past eight years. 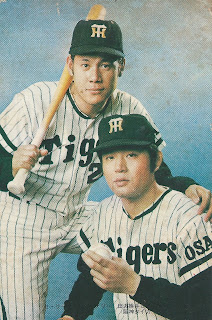 You might have seen this image on this blog before. This is from Calbee's first set, and it's quite the iconic image. Tigers players Yutaka Enatsu and Tabuchi in a studio shot, with that great 1970s Kodachrome color. I'm assuming it's Kodachrome... is there anything else? Fuji Film, since this is Japan?

Enatsu is one of the greatest pitchers of all time. In 1968, he struck out 401 batters. Even Nolan Ryan couldn't reach that... and the only players who had more than him pitched in the 19th century. He retired with more than 200 wins and nearly 3000 strikeouts over a 17-year career. That's pretty impressive when you realize that for about half of his career, he was a relief pitcher, racking up 193 saves.

Koichi Tabuchi was a home-run hitting catcher for the Tigers, with 474 over his career; in 1973 he hit four consecutive home runs. He was also pretty good behind the plate, with one of the highest caught-stealing rates; he lead the league in this category twice.

This isn't the regular Calbee card, though. That card is pretty valuable and popular, but this is the blank-backed, postcard-sized "large premium" which is much rarer. Unfortunately, this particular card is fairly damaged; you can see some dirt and rough top-right corner. I don't care! I don't remember the last time I actually saw a card from this set, if ever. And I got it for a price far lower than I expected to pay. If this card were in mint condition, it would be worth $700. I didn't pay that. And I'm happy! 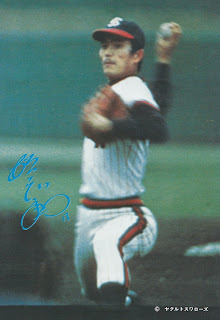 Hiromu Matsuoka pitched for the Swallows for nearly 20 years, compiling a nearly-even 191-190 record with a 3.33 ERA, and just barely reaching the 2000-strikeout milestone (he retired with 2008 K's). This card is from the 1976 Yamakatsu Blank Back Green Box set; it's about 7x10 (not a typo), making this quite large. It's too narrow to fit in a US 8x10 photo frame, though the image is too large for a 5x7-centered matte... such is life. I'm not framing it anyway, though as a kid I bet I would have.

Yamakatsu issued a bunch of these oversized cards, but identifying them is difficult. I was glad to find that I really did need an example from this particular set, and even happier to pick it up for just a couple dollars. I was looking for Calbee over the New Years holidays and saw it hanging on the wall at a card shop. A quick check of the (blank) back, and a much more scrutinizing look at Engel's vintage guide, confirmed that it was from a set I hadn't seen yet!

Now if I could only find some of those other 1970s Calbee cards I need for my type collection, and one of those Holograph hologram cards from 1989. And all those other oddball vintage cards.