The Only Two Boxes I Opened Last Year

As much as I love opening boxes and packs, I rarely do so. These days, box busting is more about the chance of pulling big hits, so it's not very cost effective. Instead, I pick up the scraps; eBay, COMC, Sportlots, and shops and shows in Japan give me singles I want for far less than trying to pull cards out of packs.

I don't completely avoid them, though. I built the 2018 Topps flagship set via jumbo boxes; it was much more expensive than buying the set, but it was pretty fun. And when I last went back to the US, I grabbed a few packs at Target for the thrill of the rip.

But in 2019, I stayed away from packs. Until the Card Festa in early December.

Card Festa is a card show, but it features a bunch of card shops instead of independent dealers. There are a couple non-shop dealers, but the event is run by the Mint chain of card shops. PSA shows up, and the OB Club arranges for a retired player or two to sign autographs and (in the past - that didn't happen this time) give a speech. A couple manufacturers usually set up tables, too; I've never seen BBM, but Epoch and TIC Secretariat/Produce 216/whatever their name really is make appearances.

TIC brought some overstock from their two Used Ball sets to the show, and towards the end they dropped the price to $25 a box. Given the original price was $60, I feel like I got a good deal for some pack busting fun. I picked up one BayStars box and one Swallows box. 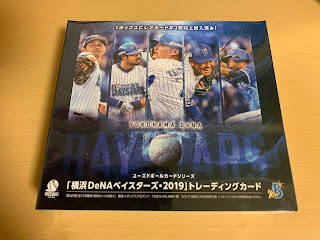 This is the BayStars box; the Swallows box has the same design, just using pictures of Swallows players. 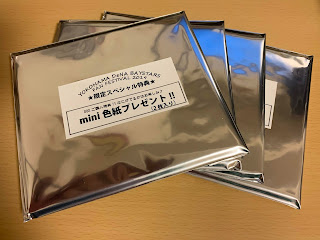 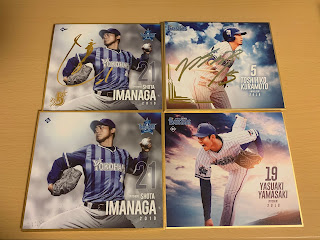 Here are four of them, so you can see the designs. There were two BayStars mini trading paper sets issued last year, and the packs had a mix from both. As you can see, there was a mix of regular and SP gold signature cards. I'm not sure if there were any hand-signed cards included, though it's entirely possible. 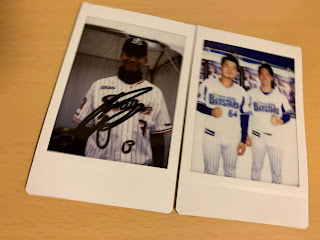 There were also free "cheki" (polaroid-style) photos, one per box. There was only one type for each team, so I took one of each. Sorry, the picture is blurry.

Okay, let's get to the packs. First, the BayStars: 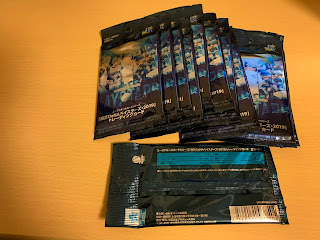 Twelve packs per box. The BayStars set originally came out in mid-July. 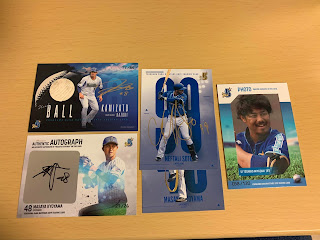 Each box guarantees two "rare" cards, which usually come as one relic and one autograph. The game-used ball relic I got is the regular version with a facsimile signature, and I got a regular autograph card. I also got two SP insert cards and one photo card. 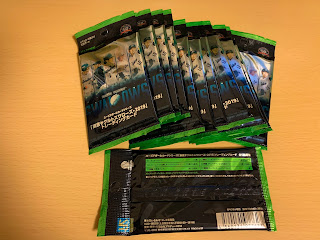 The Swallows also have 12 packs per box. These were originally released in early August. 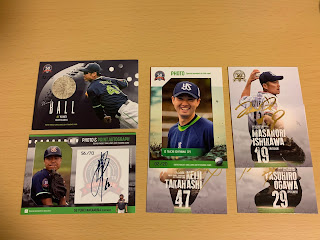 The ball cards for the Swallows don't have facsimile signatures, because there are no authentic signatures. So the second hit here is a "photo" card and facsimile autograph. I also got another Photo card, which is more rare than the photo and signature card. This time, I pulled three of the short printed inserts.

Photo cards are considered "rare" cards, so technically I got three rare cards in each box.

As for the base cards, each player has multiple cards in the set. There are 15 players in each set, and 81 cards. Players have up to nine cards in the base set; they also appear once in every insert/rare set.

As you can see, there are basically five designs for the base cards. There are some additional cards in packs: 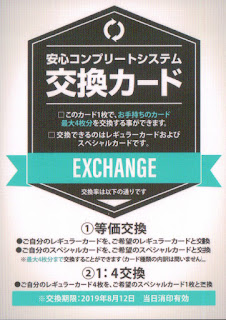 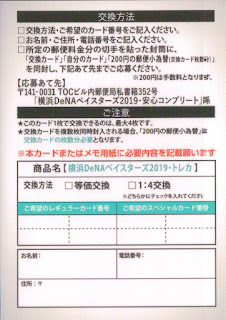 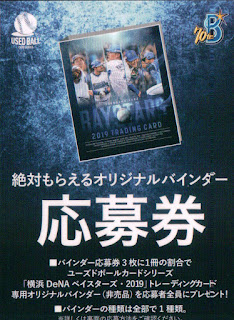 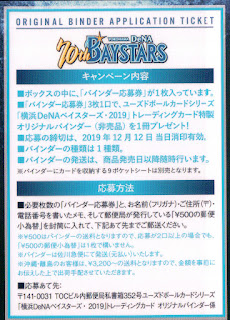 Each box also included one Original Binder Application Ticket. If you had three of these cards, you could trade them in for a special binder for your cards. 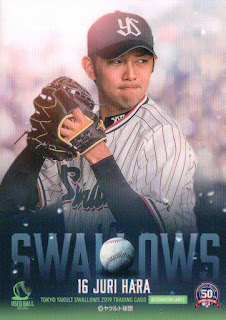 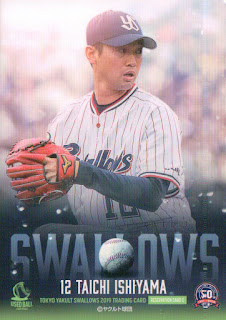 Finally, my Swallows box included one Reservation Card. These are generally distributed with pre-orders. I didn't see any box cards, and the BayStars box didn't have a card.

Overall, busting these boxes was fun, and at the price I paid, I feel like I got my money's worth. We'll see when I finally get another box to bust!