I forgot exactly how I came to add them to my collection, but I have three more oddball cards now: 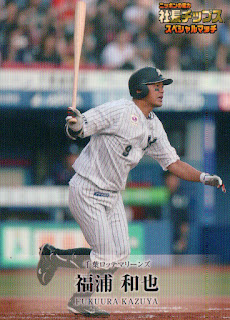 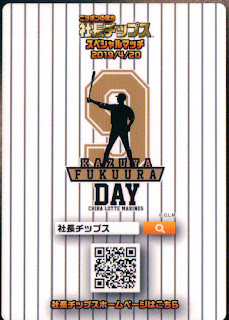 Shacho Chips (President Chips) did a special promotion with the Marines last April. Well, let me back that up a little bit. Shacho Chips is a company that provides potato chip bags as a marketing/promotional strategy, seemingly similar to what Calbee's baseball card chips do. It appears that company presidents can apply to be in the product and have a trading card made for them.

The above card follows the same basic design as the regular President Chips cards, with the semi-transparent rectangle at the bottom and a small logo at the top. I don't know anything about the real product - the company website (scan the QR code above or go here) offers boxes of 70 bags of chips/cards for about $250. There is a B-League basketball set for $300, but that features the team presidents, not any players, apparently. More than $4 for a 25-gram bag of chips and a card sounds quite ridiculous to me.

Kazuya Fukuura Day (April 20, 2019) saw the distribution of at least five different cards, one of which celebrates his 2000th hit with a special foil front. I've found evidence of at least one more card, given out the next day at the Marine Festa event.

The Swallows also have at least two cards featuring different players, both of whom are wearing business suits.

None of the non-baseball cards can be seen on YJA, either for sale or sold. 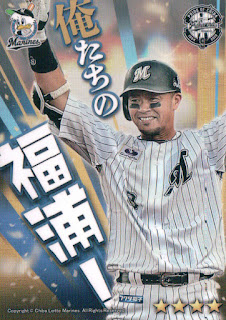 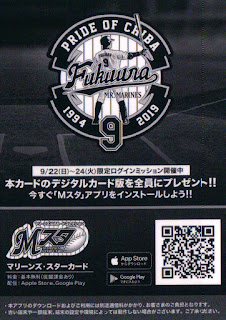 The second team issue is this Fukuura card promoting the Marines Star Card app, which seems similar to Topps Bunt in that you can collect and trade digital cards of your favorite players. There are missions in the app which can earn you points, which probably can be used to buy more cards. I'm not planning on installing the app to figure it all out. 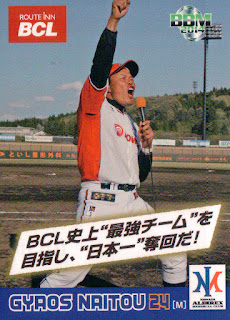 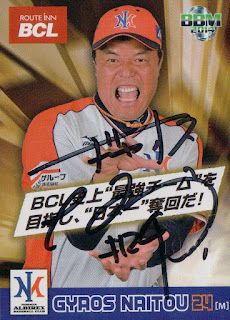 Finally, I thought I had shown this card before, but perhaps I haven't. This is a BBM promotional card for the Route Inn BCL independent league. It features Gyaos Naitou (real name: Naoyuki Naitou), who was the manager of the Niigata Albirex team. Naitou played for the Swallows, Marines, and Dragons in the late 1980s and 1990s, and is a radio commentator these days. He managed Albirex for only two seasons before he "retired".

I don't recall ever seeing any other BCL cards; I certainly didn't find any this spring at the few games I was able to attend. So it's a cool find!