Look What I Found! And my Super Collections Update

One of my goals this year is to clear out a lot of the extra stuff I've accumulated that doesn't fit in my collection. Extra cards, random singles with no home, cards I picked up with good intentions, cards I've picked up and later realized I didn't need, scraps from sets I've torn apart for other purposes.

A couple weeks ago I was sifting through a couple boxes looking for some certain extra cards, and I came across this: 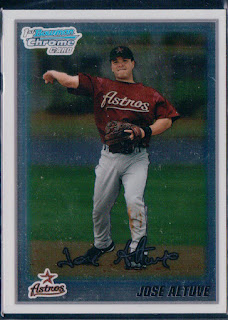 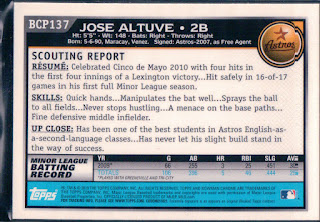 It's not PSA 10 Gem Mint, I'm pretty sure. The odd scan might come more from the sleeve I scanned it in than damage to the card, but I know I'm not buying a new car with this thing. Altuve's first cards came in 2010 Bowman Chrome, aside from a couple minor league issues in 2008 and 2009.

I actually already have a copy of this, but it is nice to have a second first-year card of a player I've been following since early 2011. By then he was tearing up the league, and he had his MLB debut later that season.

My Altuve player collection is my biggest player collection. I focus on all of his base cards and inserts, as well as some of the manufactured relics. I do occasionally end up with parallels and those get added to the collection, and I have a few autographs and memorabilia cards, but I don't actively chase them.

Right now, I have cataloged 261 base cards, of which I have 247. I'm only missing his 2012 Panini Signature Series base card and a few 2019s. As for inserts, I have 269/395 (more than 2/3), and 15 of 20 "hits" I want. Many of those "inserts" are actually Topps Now and other online exclusives, and I'm debating whether I really want to chase those. Certainly more than half of the "insert" cards I need are really online exclusives. 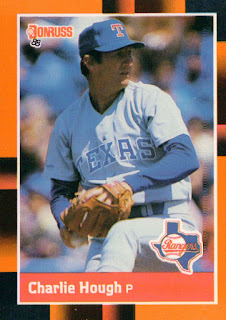 If you're wondering, my next biggest collection is Charlie Hough; I have all but one of his 133 base cards, 80% of his 185 non-base cards, and more than half of his autograph cards (that surprised me). For Hough, I collect all of his parallels, though I don't know of any 1/1 parallels. He has some printing plates, but really those are four copies. And he has a 1/1 signature card, but it's not a parallel. Doesn't matter - I'll never have that in my collection anyway, right?

Jose Altuve, Charlie Hough, Geoff Geary, and Buck Farmer are my (semi) super collections. So why don't we knock the other two off with this post: 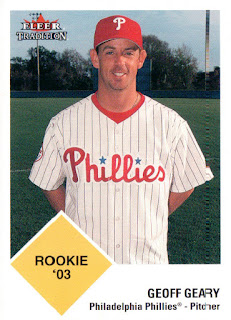 I haven't added a Geoff Geary card in quite a while. I got the last minor league card I needed of him sometime in 2018. Now all I need are three different printing plates, two autograph parallels which may or may not exist (if they do, they're /25 and /10), and a 2006 Upper Deck Special F/X Blue parallel which is limited to only 50 copies. He only has 44 cards total, so I have an 86% complete collection for him. 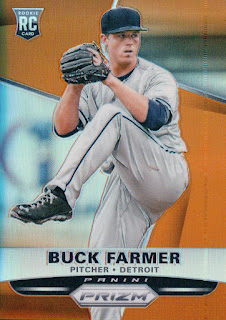 So those are my biggest player collections - my super collections. Altuve's collection will definitely get much bigger over time, Hough will get some more, and Geary is done, but how much larger will Buck Farmer's list get?
at 7:00 AM