Stuff. I have stuff.

I've been thinking a lot about stuff. Not "I have issues" stuff, but "things" stuff. "Objects" stuff. "Possessions" stuff. I have a lot of stuff.

Not safe for work. You've been warned.


I've got stuff all over the world. Stuff in storage, stuff at my mom's, stuff at home, stuff in this hotel room, stuff at work. Stuff in storage at COMC. Stuff in the mail. My cousin has a little of my stuff; I gave her a bunch of baseball cards to do some crafty thing for me as a gift ten years ago or so... where is that gift, anyway?

I've been thinking a lot about that stuff. Mainly, what I really want to do with it. I think many of my travel souvenirs will eventually get tossed. Lots of worthless trinkets to commemorate my visit to rinky-dink museums in Middle-of-Nowheresville, USA. Last year, when I went to China, I brought back one travel souvenir. I could have bought silk pajamas or lots of Chinese china or keychains or pens or books or maps. But I got just one nice souvenir.

And that's how I've been doing things lately. So clearing out the old worthless things will be a goal. Even when I went to Chicago about ten years ago, among all the other trinkets, I bought one nicer "conversation piece". I can keep that. Get rid of the lapel pins.

I don't want to get rid of my piece of the Golden Gate Bridge. It's not valuable, and it's not that big, but it is a very sentimental object. I can toss the cable car replica toy and mini Golden Gate Bridge model from the souvenir shop and fake Alcatraz handcuffs. The piece of the bridge itself reminds me of so many adventures with my grandmother, of trying to cross it on its 50th anniversary, of exploring the city and heading across it on vacation and feeding the birds and just being in San Francisco.

But what about my trip to New York City? Vietnam? Korea? What should I keep? What do I even have from those places? Do I need to keep anything to remember having been there? Should I keep anything from there, if I don't remember buying it in the first place?

Should I refocus my adventures on one specific type of souvenir? Shot glasses aren't really a thing out here, but in the States, getting one shot glass from every state I've visited would be affordable and manageable in size. Easy to display, too: a couple wall racks would fill it up. But how meaningful are shot glasses to my life?

As I've thought about what to keep and what to get rid of, two things come to mind as no-brainers: amusement parks and baseball. I've made it a point to (try to) get one branded souvenir from every theme park I've visited. Japanese parks don't have much to go on, but I get what I can.

And I got rid of a bunch of my baseball souvenirs twice: once around 1998 when I thought I was out of collecting for good (I "lost" all my game-used balls and a bunch of other souvenirs then), and once in 2003 when I realized my collecting goals were way out of hand. Both purges were, in hindsight, a bad idea.

All of this comes to mind because my apartment is, as Carlin said, a place to keep my stuff. If I do consolidate everything I own again - moving back to the States is the most likely reason this would happen - what would I do with it? My apartment was a museum of nothingness; I'd be embarrassed to have my domicile arranged as such again. And if I do remain in Japan, I guess I need to think about what to do with all that stuff in the US.

Yet, I continue to get more stuff. At least these are baseball-related, and nearly card-related. 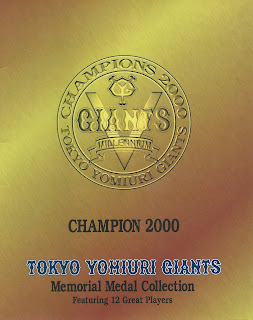 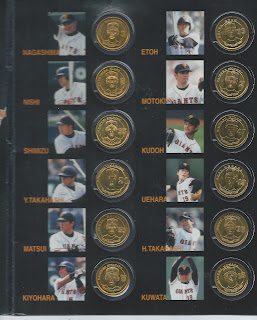 First is this 2000 Yomiuri Giants Memorial Medal Collection. I've talked about coin cards recently, but these are just coins. This was issued to commemorate the Giants winning the championship in 2000, and features coins from 12 of the top members of the 2000 team.

It is in a folder style, but I only scanned the front and one inside. The other side has an image of the team, while the back is essentially blank. 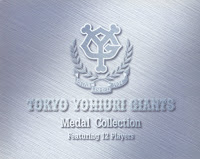 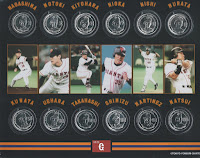 I have to shrink this image size down to fit it on the site, but here is another medal collection of 12 players. These are in silver instead of gold and don't highlight a specific season, but I would guess that they are from around the same time. This, too, is a folder, with a nearly-blank back and photos on the inside front cover. 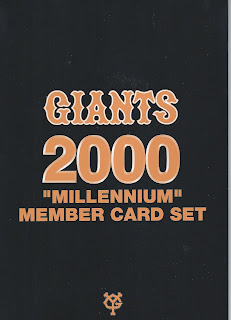 This is the Giants 2000 "Millennium" Member Card Set. I bet you figured that out on your own, as long as you can see the image above. It's a nice black folder. It's actually double-folded, so there are a total of eight panels. Four of them have cards tucked into little tabs. 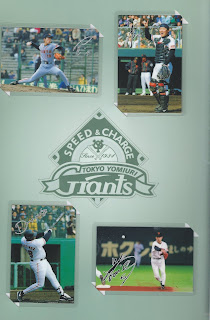 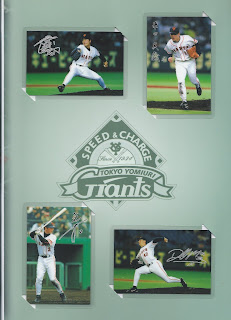 All the cards are full-bleed with facsimile signatures. 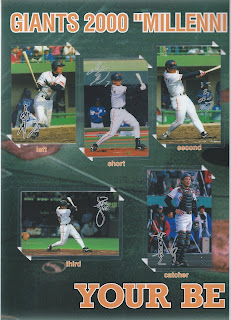 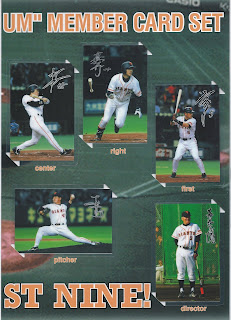 The center inside has the best player for the team at each position; essentially it's the opening day roster plus the manager. The very back is basically blank, while the other two panels don't have anything really worth mentioning.

I picked these all up for a price too good to miss... which was pretty cheap. What will I do with this stuff? Well, like my other stuff in Japan, it just goes into a box. Yep, I have almost nothing on display in my apartment in Funabashi. Everything's in a box, waiting for a final home where it can be displayed and gather dust like it was meant to. But until then...