BBM's truly high-end release, Glory, came out in late December, and offers up what is to be expected from their annual offering.

I should note that I haven't obtained any cards from this set for myself yet, though I have a few of the memorabilia cards for someone else. So all of the images below are promotional images from BBM. 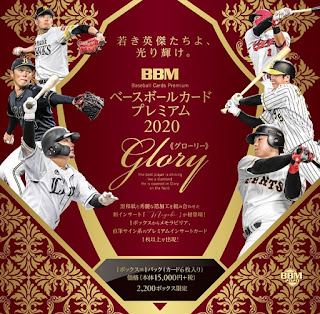 Each box contains one pack of six cards, with at least one of those being an autograph or memorabilia card. Each box retails for 15,000 yen, and only 2200 boxes were produced.

Crunching production numbers, you'll basically get 3-4 base cards and parallels, one insert, and 1-2 memorabilia or autographs. 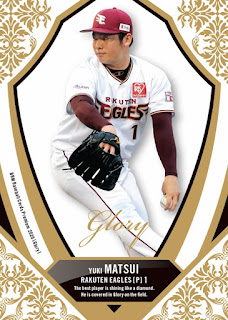 The base cards are very thick and feature an intricate gold design. There are only 36 cards in the base set, with three players from each team. Some players appear in the other sets but not in the base set. 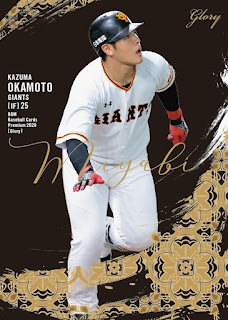 Miyabi insert set has a black background with an intricate gold foil design, and parallels the base set checklist, meaning there are 36 cards in all. Each card is numbered to 50. 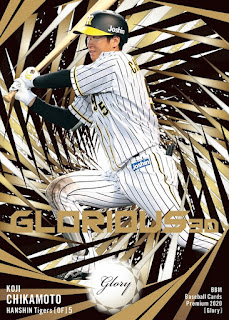 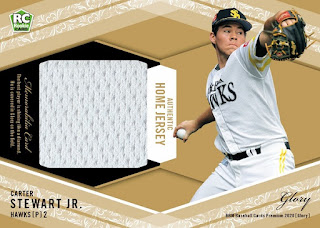 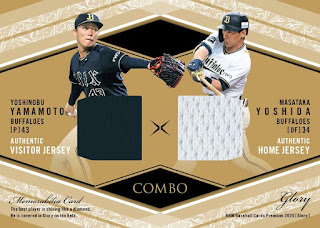 12 Combo Memorabilia cards; 10 teams are represented (no Giants or Lions), each with one card. The other two cards pair two players from different teams; of those four players, three have other combo memorabilia cards. The fourth (Taiga Kamachitani of the BayStars) has no other memorabilia cards in the set, so his fabric must be left over from 2019 sets or being used in upcoming 2020 releases. Both the Fighters and Marines cards feature dual swatches from the same player (Wang Po-Jung and Kyota Fujiwara, respectively), using different jerseys. 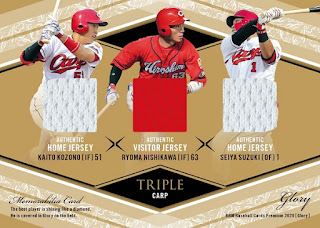 Three Triple Memorabilia cards feature jerseys from the Carp, Tigers, and Fighters. All cards are numbered to 20, with patch versions numbered to 10. 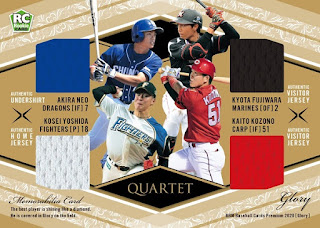 This is the one Quartet card in the set, and is numbered to only 10 copies, with a #/5 patch version also available.

Patches for all of the memorabilia cards can vary greatly. Most teams use sublimation technology for printing almost the entire jersey design, including player names, so patches are just multi-colored swatches of fabric in most cases. However, sleeve patches tend to be patches in the traditional sense of the word, and as such look much more interesting and carry a bigger premium. 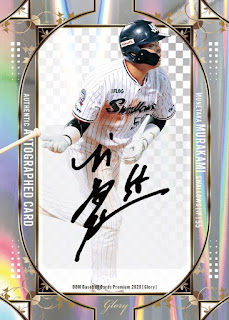 The set is rounded out with autographs, using stickers as always. Print runs are up to 30 copies for most players, though a couple players have 50 copies each. Some players have a print run as low as six copies.

While the top-end cards from this set go for big bucks, like any other high-priced release there is a lot of risk in opening a box of Glory.
at 7:00 AM