Topps has been producing its Allen & Ginter line since 2006. This will be its 15th year; that's a long time for a secondary card brand. I would guess that they never thought it would last so long after other throwback lines like Topps206 and Cracker Jack were only successful for a couple series.

But A&G is popular because it balances baseball with pop culture. That's exactly why I like it, too. However, even today I see people complain about the inclusion of subjects like eggs and gamblers; you'd think that after 15 years people would know what to expect.

And what they probably don't realize about sets like Allen & Ginter and Goodwin Champions is that the multi-sport/pop culture nature of the checklists is an homage to the original releases. The original Allen & Ginter N28 set included only ten baseball players in a set of forty sports personalities. And the other two sets they issued with baseball stars had only six players in each 50-card set.

The cards below come from a similar set issued in Japan. Most vintage Japanese collectors already know that a lot of the 1950s and 1960s sets (especially menko) included cartoon characters or other pop culture subjects. This is the JGA 149: c. 1962 Sideways Playing Card set.

JGA 149 has an unknown manufacturer, and was issued in either 1962 or 1963. The 44-card set includes movie and TV stars, sumo wrestlers, and of course, baseball players. The set came on two uncut sheets, each with 22 cards. It doesn't include typical menko symbols, so it rightfully isn't classified as a menko card. However, I'm guessing it was distributed similarly to menko, or it could have been a premium (prize).

Like many menko and other game cards of the era, the cards were distributed as sheets, and later cut into individual cards. The backs are identical and styled similarly to a playing card. The kanji below the playing card image is the player's last name. Usually, the position is included, too. The card above is for Katsuya Nomura, but his position isn't included on the card due to space concerns.

The key card in the set is Sadaharu Oh, who you see on the left, above. His name is only one kanji character, so his position follows. On the right is Masaichi Kaneda, and the last two characters represent his position as well.

I'm missing two baseball players: Shigeo Nagashima (7 of Spades) and Yoshio Yoshida (10 of Hearts). For some reason, Engel's latest guide values the Oh card at twice the value of Nagashima; in Japan it would probably be the other way around, or they would at least be equally valued. 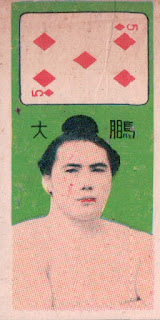 As little interest as I have in sumo wrestling, I think it would be neat to have a set of the uncut sheets!