Show the new teacher where to take out the trash, how to teach preschool, and a whole bunch of other stuff: done.

I mentioned that I had been flipping through a couple of the "extras" boxes I've stacked up over the past few years. Some of the last cards I came across over the New Years holidays (yes, I'm still getting through those scans 20 days later) were forgotten about perhaps six years ago.

You see, back when I wrote the 1975-76 Calbee By Year post, I broke the set up into subsets, and was inspired to find some examples of cards from those subsets.

And I did. I grabbed a few at a shop or at a show. Or perhaps I already had them and didn't realize it even back then.

And then I forgot about them. They got tossed into the extras stack, and there they sat for a large part of a decade. And then, we hit a new decade. And I found them.

The 1975 portion of this set had seven subsets. Two of them overlap in card numbers; the last 35 cards in the set are Star History or Japan Series. Star History features players in 1975 and in the past using a color photo and a black and white photo. 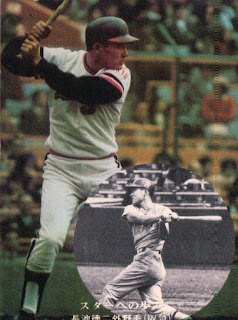 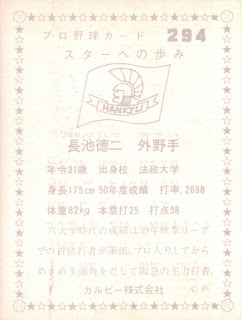 Card #294 has Tokuji Nagaike. He's not really much of a star, but he was popular enough 45 years ago to end up in this subset. 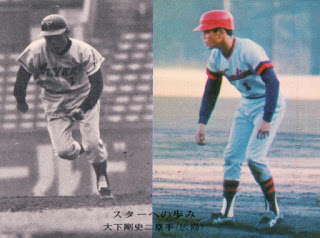 Here's #323, with Tsuyoshi Oshita. Another player who really isn't that popular now, but ended up in the set anyway. You can see that the old photo could have been displayed in multiple ways on the card. 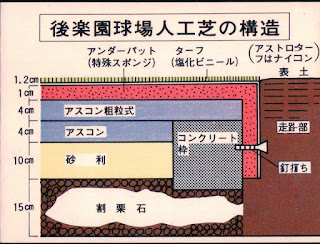 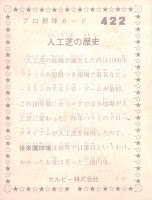 The third series to be issued in 1976 was the regular series; before that were the two magenta-bordered series Pennant Race Stars and Spring Training. The regular series has several team cards and multi-player cards, and three cards featuring Korakuen Stadium's turf. Yes, three cards in a baseball card set were about dirt.

The card above describes the many layers of the astroturf playing surface. I might try to get all three and do a full-on post attempting to translate everything, but until then, you can just enjoy the beauty that is an educational piece of cardboard that was sold with potato chips 45 years ago. Too bad they didn't have relic cards back then.

(Random tangent: Tokyo Dome resurfaced its playing field some years ago, and turned the old turf into a souvenir; each piece is about the size of a coaster. I grabbed one piece, and I'm quite glad to have it! Similar random tangent: over a decade ago, I came across a doormat-sized piece of artificial turf - maybe from Cincinnati's Riverfront Stadium? I still have that oddly-shaped cut of plastic and rubber, and it still has some dirt in it from use. I don't know how I'd go about authenticating it, or even if I could, but to me it's the biggest piece of a major league ballpark I own. Until I can actually get a stadium seat. Ah, more stuff I can't have for a house I don't have...)

I've updated the original 1975-76 post with these images, and I'll continue updating as I gather new type cards for Calbee subsets over the year.