I've been busy! I finished my road assignment last week, and got back home on Sunday... and promptly went out to a card show and a couple card shops. I still have three piles of things to put away in different places, and three stacks of cards from the show and recent online pickups. I've been using my free time to get reorganized and settled in, inventory and scan everything I've picked up, and properly cook dinner. And yesterday, I worked across town - about a 90-minute commute each way. But now I'm working nearby, so I should have more free time. Let's get back to writing, huh?

The first, easiest argument is aftermarket 1/1s. I'm sure there's still a bunch of those out there on eBay and circulating at shows and in shops. Some guy prints up some 1/1-notated hologram stickers or comes across a foil stamper, creating their own "special" 1/1s. I'm not sure I could call them fraudulent, unless they're misrepresented in some way.

But that leads to fraudulent 1/1s - cards made to look factory-stamped as 1/1s, copying the position, style, etc of legitimate 1/1s. Some aftermarket 1/1s would fall here, as I think hiding some small print in your eBay listing is deceptive.

And since I mentioned eBay in the first two examples, the third eBay example is "eBay 1/1s" - #1/25 is not a 1/1. Jersey number-serialed cards aren't 1/1s. So on, so forth. It is highly possible that, for on-card autographs, the first serial-numbered card was the first or last card signed by the player, meaning it could have the best (or worst) signature. But that's different.

I still consider factory-stamped "event" 1/1s to be 1/1s, but with asterisks. When Topps, Donruss, Upper Deck, etc. made 1/1 cards for Nationals or other card shows, the only distinction was the 1/1 stamp, and thus aren't really any more unique than the regular base cards that they parallel.

Along those lines, any 1/1 parallel that isn't unique from its base card beyond the stamp is somewhat depressing. Parallels, overall, need to be distinctive. Topps Triple Threads has some relic sets that are impossible to distinguish from each other beyond the serial numbering, for example.

Printing plates are marketed as 1/1s, and yes, there should be only one black printing plate for Ichiro in 2003 Topps, but the three other colors are essentially the same thing. I'll take all your Buck Farmer printing plates off of your hands, but as far as my type collection goes, eight Topps Total plates (front and back, four colors each) equal one entry in my list.

Now, there are cases of accidental one-of-one markings on cards or entire sets. Those definitely don't count. Sometimes, they're supposed to be one-of-one, but they aren't.

And then there's Topps Moments & Milestones. 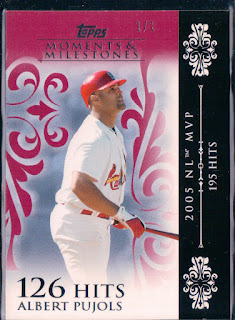 The Albert Pujols card above is the second 1/1 card I've found from this set. I don't have two Pujols 1/1 cards from this set, I think. But there are 195 of them in all!

That said, since I already have a red parallel from this set, I can put a 1/1 card in my Albert Pujols collection!