A couple weeks ago, I was sifting through some of my extra cards, looking for ones that might fit some of my newer collections. And as I was checking the years on some Calbees, I saw this: 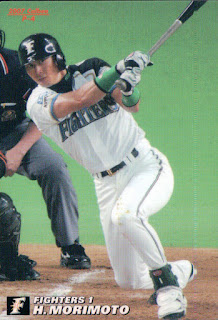 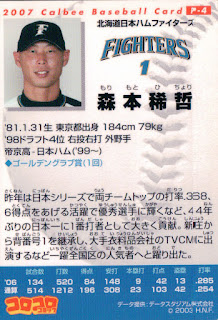 At first glance, it looks like a normal Calbee card. But more than just a simple glance reveals it's not: on the front, the card number is P-4, and the back has the same card number and a Corocoro Comic logo at the bottom.

This card had just randomly come to me at some point, possibly just protective filler for an auction, or perhaps part of a lot where I only needed certain cards.

So I've done some research, and I've found that at least four Calbee cards have been inserted into Corocoro Comic magazines that are related to baseball. There also seem to be at least four Kamen Rider Calbee cards, but that's a story for another post, or even another blog.

Only one real player appears in the set, and you see that card above. Hichori Morimoto is a Korean-Japanese (Korean descent, born in Tokyo) former baseball player who was drafted in the fourth round back in 1999. He played for the Fighters through 2010, and then he played for the BayStars (2011-2013) and Lions (2014-15). 2007 was his career year, batting an even .300.

Oddly, though this is numbered P-4, I couldn't find any evidence of P-1 to P-3. Perhaps (some of) the Kamen Rider cards fill in the numbering. I have discovered that cards P-1 through P-3 were issued through other magazines, and those three cards have two versions. I'll eventually get the proper information posted. (Edited 2020/01/17)

I just picked up the P-5 card (I should have it in hand by the time this post goes live, or in the next couple of days), and I hope to eventually get the other two (it seems PS-1 might be in the bag, too). PS- cards use the Starcard design. P-5 has two anime characters: Miyamoto is pitching and Kuroemon is batting. Each character has their own card in the Starcard design, and it looks like the images used on the Starcards are different from the P-5 card.

The characters come from a manga (Japanese comic) called Dorabase, which is a spinoff from the extremely popular Doraemon series. I might actually look into this more in the future, but for now I'm just happy to have discovered another rare/oddball Calbee card!
at 7:00 AM