While I'm always on the lookout for any cards I need to finish sets, some sets are higher on my priority list.

Several years ago, I decided to put together a master 1996 Topps Laser set. I eventually got the base set done, and I've been working on the inserts ever since.

There are three insert sets, each with 16 cards. Stadium Stars is the rarest, appearing in 1:60 packs. Only 24 packs came per box, meaning it would take two to three boxes on average to get just one card; with perfect collation that makes forty boxes to get a full Stadium Stars set. That would be, with great luck, 20 boxes of each series.

You'd probably get one and a half Power Cuts sets, as those are 1:40.

The easiest set is still essentially a box hit, appearing 1:20 packs. That is the Bright Spots insert set. The checklist focuses on younger players expected to be future stars. Jason Kendall has a card, as do Chipper Jones and Hideo Nomo. And there's Bob Wolcott, Brooks Kieschnick, and Jimmy Haynes. Do any of those names ring a bell?

There is one more big name in the set: 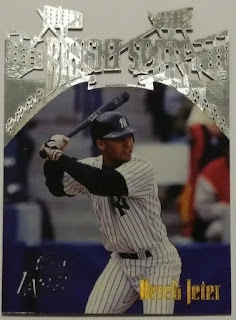 1996 was Jeter's first full season in the majors, and he tore up the American League, batting .314 and winning the AL Rookie of the Year award. It certainly makes sense that Jeter would appear here, but he has a unique distinction in the set: he has two cards. No other player appears twice.

Thanks to Jeter's popularity, both of his cards were ones I needed as I approached the completion of this set. I lucked into finding the Series 2 card, #13, at a show in Tokyo, and I got an amazing deal on it. Card #2 here, from the first series, has proven itself to be quite elusive at affordable prices. I still feel like I probably overpaid, especially looking at that bottom left corner, but I'm happy to knock this card off the list.

I still need ten of the Power Cuts cards and 14 Stadium Stars. Perhaps I can finish those off in the next decade.