There's no K in Thigpen

One of the best things about the Tokyo Collector's Card Show is the selection of cheap hits. While there is a lot (A LOT) of basketball there, there are plenty of baseball cards to flip through. Some of the regular dealers have some good "dime" and "dollar" boxes (really, 10 yen, 50 yen, and 100 yen boxes or stacks) which give me some fun cards and hidden gems, and the non-regular sellers often price their cards to move. Sometimes, there are so many cards that I just grab what I can and sort it all out later. That does result in some extras or cards that just have no good place in my collection, but in the end I've never had buyer's remorse after the show.

Here are four cards that I definitely found homes for in my collections. 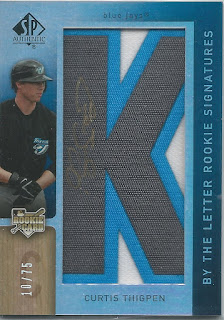 One slow-moving project I have is collection a full alphabet of letter patches. I'm perfectly comfortable getting manupatches, though most of those end up being these autographed rookie cards. I now have I, K, O, P, and R. I'm pretty sure that the I, K, O, and R are all from the "ROOKIE" word sets. I have a feeling Q and X will be the most difficult to find. 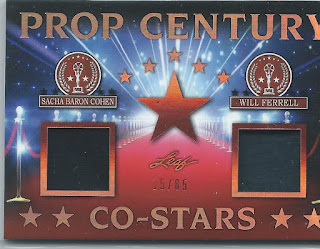 For the first time, I tried using my scanner for regular-sized cards. It seems that my scanner just flat-out ignores a good part of the edge of the glass. I'll have to keep that in mind next time I scan with it.

I should probably note that my scanner/printer isn't hooked up to anything right now - I have to put an SD card into it, scan everything to the card, and then import and crop the images on the computer. So the entire batch of cards I scanned last weekend suffer from this problem; that really only affects about half a dozen cards in the end.

I already have a relic card for Will Ferrell, which is a six-swatch six-star card from 2018 Pop Century, and Sacha Baron Cohen isn't a favorite. But this was one of those "I'll buy that for a dollar" purchases. 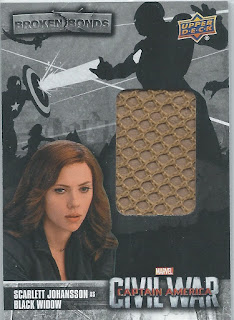 I also already have two Scarlett Johansson relic cards from 2008 Upper Deck A Piece of History; one swatch is black and the other is white. But this card is worth far more than I paid for it, and I won't turn away a Scarlett Johansson hit. It took a little bit of research, but this is from her tan jacket in Captain America: Civil War. I wouldn't mind one more relic featuring her black costume, but I'm not searching for it. 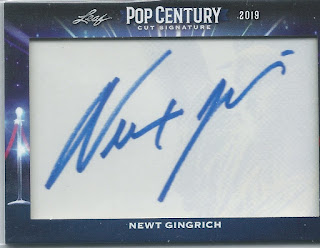 Another scan with a cropped image. Why on Earth do I have this card? I have a few political autographs already: Jimmy Carter, Bill Clinton, Chelsea Clinton. (Maybe I should get Hilary Clinton's autograph to complete the family set.) Gingrich represented Georgia for a long time, and I lived in Georgia for almost 20 years - in fact, in his district, for a large part of that. And he is an influential part of America's political history. In addition to serving as Speaker of the House, many people (see his Wikipedia article) believe he was a major contributor to the changes that brought the polarization and partisanship we see in Washington today. (Not that I like that. Like Hitler being the Time Magazine Person of the Year, importance equals neither popularity nor righteousness.) But this was sitting in a 100-yen box, and I can't let this card get away for that price. So now, I have a Newt Gingrich card.

That's all for now. Do you deliberately have any autographs of people you don't necessarily like?