The BayStars sets seem to be comprehensive, containing every player on the roster at the time of issue. I call these "B*Spirit" given the notation on the backs. This also distinguishes them from other BayStars sets; the past two seasons saw team-issued (or at least, team-sanctioned) pack based sets. (I opened a box of one of these a couple months ago; they are technically issued by Produce216, but don't carry TIC logos or copyrights.)

I was happy to grab a big lot of cards from the past several years in hopes of finding some Rami-chan singles I didn't have and filling in some gaps. I was successful on both fronts; you'll see the Ramirez cards included below, and for several of the years, I grabbed one card from the stack for the type collection.

Note that, to save space, I've left these images pretty small. But you can enlarge them by clicking on them, or right-clicking and opening in a new window for the full size window. Of course, if you're on mobile, that might be more difficult. Sorry. 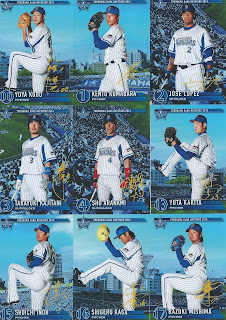 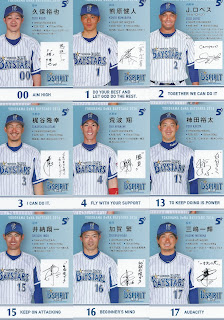 The 2016 set was the most represented in this lot. It is my favorite set, so that was a bonus. 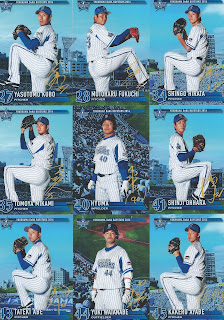 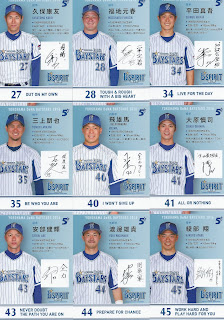 If you didn't notice, the backgrounds are images of Yokohama Stadium. What I didn't notice until now was that the cards could actually be pieced together like a puzzle to make a big stadium image. 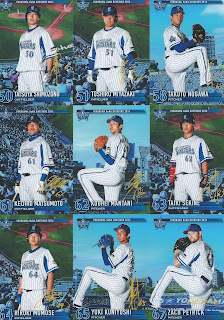 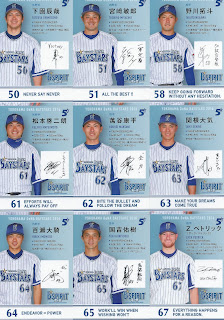 Not exciting are the poses. I bet you can tell who all of the pitchers and catchers are just by looking at the photos. The straight-on mug shot on the back is pretty plain, too, though I like the isolated facsimile autographs. There are interesting inspirational quotes on the back. I don't know how or why they were chosen. 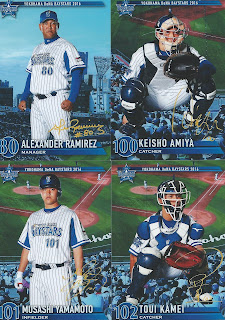 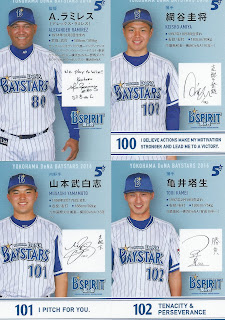 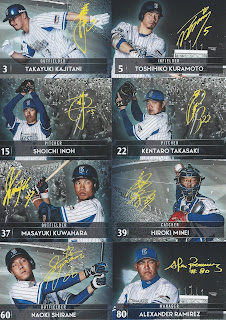 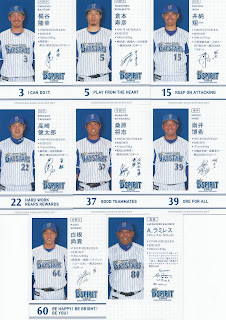 I only have eight cards from 2017. But there's another Ramirez. This time, the background is black-and-white, though it looks like you could make a full stadium image by piecing the right backgrounds together. Backs are similar to the year before, including the same quotes for each player. 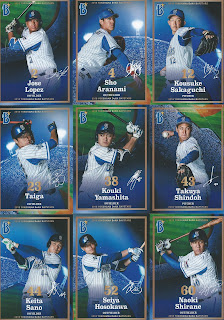 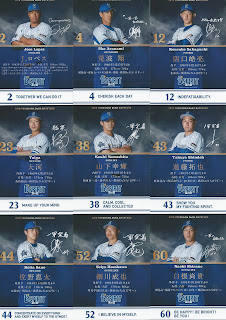 Here's 2018. I have 14 of these, but none of Ramirez. The quotes seem to have changed, though again the front has an image of the stadium. I can't tell for sure, but there might be two different angles. 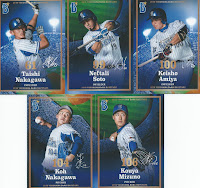 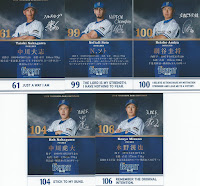 I think the cards look better overall because the backs have more color, though the quotes are back, in the same place. Those numbers, by the way, are jersey numbers, and are the only numbering on the cards, making BayStars B*Spirit sets skip-numbered. 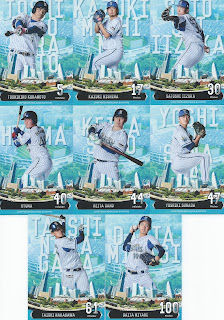 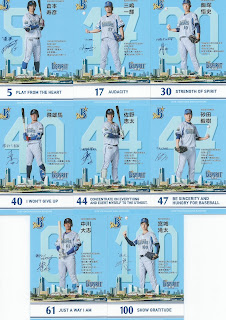 Finally, 2019. And finally, no more stadium puzzles. Instead, we have giant players standing in the Yokohama skyline, with a background of the entire stadium. Between the player and the stadium is a giant WordArt rendering of the player's name, fitting on two to four lines. The backs have another angle of the skyline with a second pose instead of just a headshot. And the quote lines are back. Again.