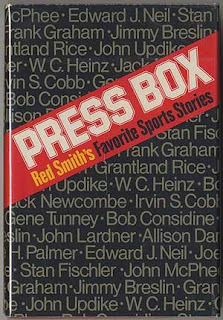 Red Smith is considered one of the greatest sportswriters of all time. I can't say I've read any of his work, other than this book's foreword. And in that foreword, Smith claims that the works included aren't necessarily the greatest, but that they are enjoyable.

Press Box is a digest of sports stories, as you might gather. The stories were originally found in newspapers, magazines, and books. And all are fairly long - all 18 stories average about 10 pages each. Some are written by sportswriters, others by other authors. Some written literally as the events unfolded in front of them, others compiled decades after the stories were first created.

"Dempsey vs. Carpentier" follows a major boxing event; the story begins describing patrons flowing into the arena to take their seats, moving through all of the lesser fights bit by bit, before reaching the big fight everyone came for. Written by Irvin S. Cobb, it was an interesting read that painted a vivid picture of the day; his words really help the reader visualize not only the match itself but the surroundings and atmosphere. Cobb wrote the story on the spot, with individual portions being sent as they were written to the newspaper to be prepared for publication.

On the other hand, Red Grange's story was told in "The Ghost of the Gridiron" by W.C. Heinz nearly 40 years after Grange played football in Chicago. Grange wasn't necessarily proud of his accomplishments on the field, and that sentiment is portrayed well in Heinz's biography.

This is a sports story book, and most of the stories aren't baseball. But there are a few:

"The Best Team Ever" idolizes the 1927 Yankees, while the 1962 Mets are called "The Worst Team Ever". Grantland Rice wrote "The Big Fellow" when creating a tribute to his friend, Babe Ruth. And Ted Williams' final game was reported on by John Updike.

The topics are some of the biggest in their respective sports, especially early in the book. But I'm not jaded; I'm glad to read yet again about the 1927 Yankees. And I'm happy to hear even more about Babe Ruth, despite him being mentioned in almost every single baseball book ever written. I've never read about boxing or football, either.

The writing, however, leans toward hyperbole. When you're writing about the "greatest" or the "worst" in a sport, and when you're trying to paint a certain picture of your subject, the language and writing style becomes almost formulaic. A nearly-Sopranos episode-style ending. The 18 stories in the book all look at the greatest or the worst. There's so much amazement. Such attitude, talent, and pride.

With 18 stories by 18 authors, each "chapter" has its own style and flow. And this is seen most in "Dempsey vs. Carpentier". Here's an example:


Conspicuous at the front, where the lumber-made cliffs of the structure shoal off into broad flats, is that type which is commonest of all alongside a fight ring. He is here in numbers amounting to a host. There must be thousands of him present. He is the soft-fleshed, hard-faced person who keeps his own pelt safe from bruises, but whose eyes glisten and whose hackles lift at the prospect of seeing somebody else whipped to a souffle. He is the one who, when his favorite pug is being hammered to a sanguinary Spanish omelet, calls out: "That's all right, kid, he can't hurt you." I see him countlessly repeated. For the anonymous youths who in the overtures are achieving a still greater namelessness by being put violently to sleep he has a listless eye. But wait until the big doings start. Then will his gills pant up and down as his vicarious lusting for blood and brute violence is satisfied.

This paragraph is describing the fans attending a boxing event. Reading this particular story was painful. I had to read entire paragraphs multiple times just to understand what is happening. That paragraph, and the fight it attempts to describe, happened in 1921, nearly 100 years ago. Did the people of 100 years ago use words like hackles? saguinary? vicarious? My autocorrect dictionary doesn't even recognize countlessly or namelessness.

It is writing like this that made me put down the book. I just had no interest in reading about sports I don't have an interest in, in a headache-inducing style, full of over-importance. To be fair, most of the book is written more accessibly. But every article puts its subject on a pedestal. Every subject is an idol to be worshiped.

I read all of the baseball stories and a few from other sports. But I've found myself having no interest in reading many of the others. Too much toasting, not enough meat. In the end, the writers were too invested in glorifying their subjects. Perhaps if I had read one chapter - one story - every month from this book, I could have enjoyed it more.

Let me sip my Jack and Coke. Don't force your straight, aged whisky down my throat by the bottle.

This was my third book of the year. I didn't finish it from cover to cover, but I consider it finished. And as February comes to a close, I'm moving right along in my quest to read at least 12 books this year. In fact, I'll finish my current book soon; if not this weekend by the end of next week.