One of my goals this year is to make some major progress on my mini frankenset. Well, a lot of these cards were purchased but not added to my list, so... bonus! And I got a bunch more when I was with Dan at a shop in Tokyo. Luckily, there weren't many duplicates between the two stacks.

The first four cards are from four different sets! And only one has logos. But the other three come from sets with really unique checklists.

Inventory of baseball? Are you sure about that?

A&G doesn't look so good in a horizontal format, especially on minis. Diamond's image is about as big as the end of a pencil eraser...

My mini frankenset has plenty of non-baseball subjects, especially with some of A&G's insert sets. But Nick Lachey, former boy band member and significant other to Jessica Simpson, gets a card because of his part-ownership of a minor league baseball team. 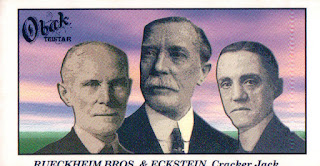 A sports star in a suit... not the first time, but always a novelty.

Catchers in their gear: always cool.

Catchers in their gear: always cool.

When are turtlenecks coming back? I'm not sure if turtlenecks getting back into fashion would be good or bad. I don't really look good in solids.

Yes, some of the cards in my collection are original 2006 Allen & Ginter minis!

There are lots of 2006 A&G cards, actually. That shop in Tokyo had a bunch.

That's an awesome group of subjects on minis! Pujols is one of my favorite players, and I like LaRussa from his Oakland days.