Being a Team Player

Every card in my type collection is technically equal. My 1989 Topps base card is just as important to finishing my collection as a 1/1 Babe Ruth autograph. In fact, since I focus most on base cards, followed by inserts, I would argue that the '89 Topps nickel box single is more important.

But nickel box singles are a dime a dozen. And mainstream cards aren't so hard to find; even "rare" parallels and inserts can be found online somewhere. It's the regional and team issues that I find most challenging to locate. And in Japan, I'm pretty sure the vast majority of them are uncatalogued.

So these team issues are more exciting to find, even if they are "equal" to the base cards.

This is 2017 BayStars B*Spirit. B*Spirit is the BayStars fan club. Most team issues in Japan are issued through the fan clubs, though some teams (including the Eagles and BayStars in 2018) issue their own regular sets, and other teams (especially the Giants) distribute cards as stadium giveaways.

The card has an interesting holographic foil coating, which showed up in my scan. Each card has four different photos, and the season slogan can be found on the back.

The 2018 B*Spirit set only has two photos, but both are full-bleed images. And this year has statistics. The front of Yamasaki's card commemorates three years of 20 saves per season. 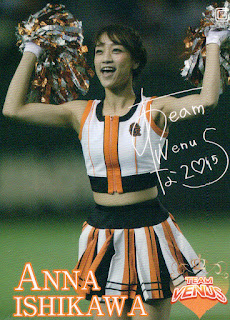 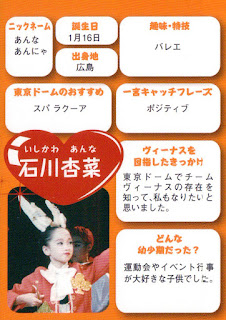 Team Venus is the name of the Yomiuri Giants cheerleading squad. I don't know who exactly issued this set or how it was distributed, but thanks to Anna's signature including the year, we can see that it was issued in 2015. The back has a bunch of little facts, like what she recommends at Tokyo Dome and her catchphrase. It seems to be a requirement that every celebrity, mascot, and performer in Japan must have their own catchphrase.

The final three cards were issued by the Swallows in 2008. They are parallels, as noted below. 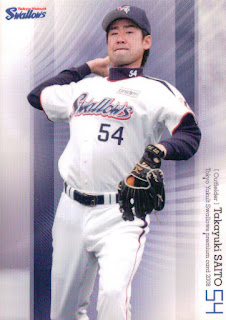 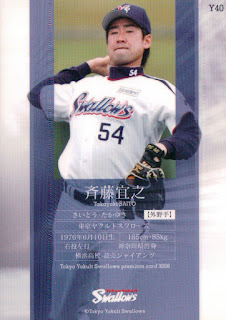 The base card is similar to most trading cards. It reminds me a lot of the cardstock Hits uses for its idol cards and oddball sets. And Hits has issued a few Swallows sets recently that make me believe they were the printers. Base cards have Y prefixes in their card number. 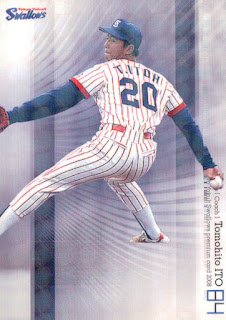 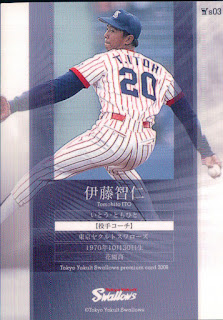 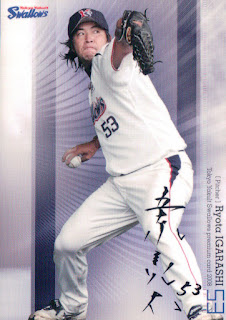 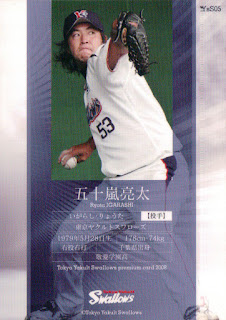 Finally, I have this black printed signature - it's a facsimile signature. These have YsS prefixes.
at 7:00 AM