While everyone laments the difficulty in parting with their excess "junk wax" era cards, few people realize that the late 1990s is full of sets that are interesting and challenging to complete.

I started collecting as a kid during the height of the overproduction period, which was fine with me. I just wanted to buy packs to get cards and maybe make sets. And I didn't even make any real progress in that respect until 1992, when I built the 1992 Topps set pack by pack, with a little trading or buying at card shops thrown in.

As many investorscollectors left the businesshobby around 1994 card strike, card companies were getting more and more innovative with their inserts. It was the 1990s that brought us certified autographs in packs, relic cards, and parallel mania. And before relics and autos really became the selling point of boxes, rare and interesting inserts were the thing.

Remember Fleer ProVisions? People liked those because they looked cool. Rookie Sensations? Donruss Elite inserts? They were super-rare and attractive.

These days, there are plenty of good-looking, desirable insert sets, but they rarely hold the drawing power of a 1990s Upper Deck SP. A lot of my set collection is made of sets from the 1990s, some of which are proving to be quite difficult to finish at a reasonable price.

Take 1996 Pinnacle's Essence of the Game: 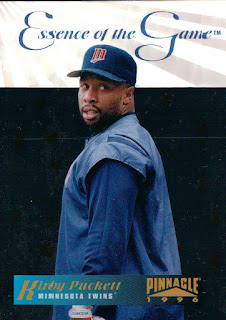 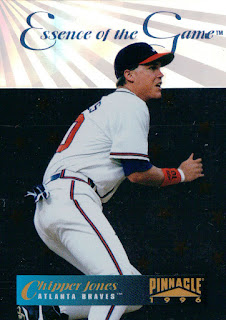 Inserted at a rate of 1:23, or about one per box, this 18-card set is full of big names, many of which are in the Hall of Fame. There are rarer cards in 1996 Pinnacle, but the clear acetate background with orange stars (my scanner can't really pick those up) and metallic top really looks great in person. And that's what matters to me. So that's why I'm trying to finish the set.

Since the 1990s are often overlooked and forgotten by sellers, COMC and Sportlots don't have a great selection of cards from the set. But after picking these two cards up at a small card show here in Japan, I'm pretty close to finishing the set off. A little bit more effort this month will see this set knocked off the want list for good!
at 7:00 AM