This post will show all of the Korean cards I have which I can not identify. This is intended to be a permanent post, updated as cards are added or subtracted. 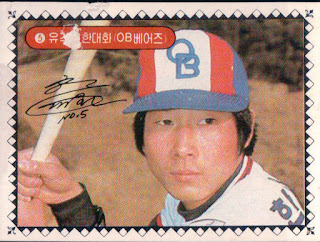 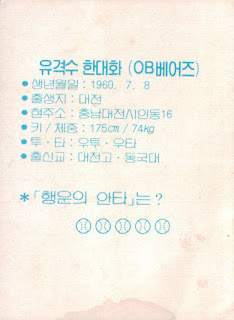 Card size: 2-7/16"W x 1-13/16"H. Very thin, might be for a sticker book. Player is Han Dae-hwa, pictured here with the OB Bears. He played with the Bears 1983-1985, which means this card was issued sometime during those years. He is listed on the back as a shortstop, which means this is early in his career, as he eventually moved to third base. However, I don't know if he moved to third while he was with the Bears or once he moved to the Tigers in 1986. The box on the front has his jersey number, followed by position, name, and team name in parentheses. There is also a facsimile autograph over the photo. The blue text on back lists his date of birth, place of birth, current residence, height and weight, batting and throwing arms, and schools. The bottom asks "What is 'good luck'?" 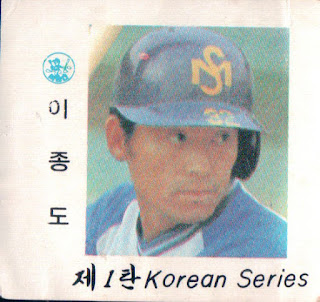 Card size: 1-29/32"W x 1-25/32"H. Card is somewhat off-center so these might be approximate sizes. Very thin glossy stock, basically paper. Backs are blank. These could be intended to be pasted into an album.  The front has a KBO logo and the player's name on the left. The bottom says The/My First (??) Korean Series (I can't translate the character next to "1"). The player is Lee Jong-do, pictured with MBC Chungyong (Blue Dragons, which would later become the LG Twins). He played with them 1982-1984. I'm not entirely sure, but the SM on the helmet probably stands for Seoul MBC (this is definitely MBC, but I can't explain the S). Given that the bottom indicates a first series, this might be from the first season of KBO, 1982.
at 10:00 AM