The first autobiography I can remember reading since... college? The full title here is: The Mick: An American Hero, The Legend and the Glory. It's written by Mickey Mantle himself, with Herb Gluck. 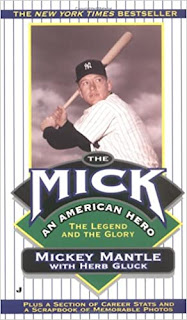 I'm not that old. Mickey Mantle is another one of those old Yankees stars that I didn't really know about. I knew he was a switch-hitting power hitter during the Yankees 1950s dynasty. I knew he had bad knees and was a spokesman for Upper Deck in the '90s.

This is the smallest book I've read so far this year. It has 260 pages, but it's smaller, and written in a very casual, simple way.

It's Mickey Mantle, telling his story. As such, there's a good bit about Mantle's life behind the scenes. Mickey talks about his childhood and teenage years in Oklahoma. He talks about his pastimes, schooling, girls, and his family's financial difficulties.

As he moves into his career, he talks a lot about his teammates and life off the field. He mentions his performance on the diamond, but he approaches his accomplishments with a self-deprecating attitude.

He comes across as a good ol' boy, and I'm not sure if that's who he really was or if it was an image created for the book or publicity in general. Mantle talks about partying and hanging out and generally having a fun attitude, and based on what I read in October 1964 I have to believe him. So maybe he really was a fun-loving simple guy who loved to play ball.

I think I finished this entire book in just two days, with about two to three hours of actual reading time. So it's very easy to read. But like the other books I've been reading, it has a good narrative and it's possible that Mickey wrote his own movie; I could see this book turned into a biopic. The only problem - Mickey tells some interesting short stories, but there are fewer scenes than summaries here. 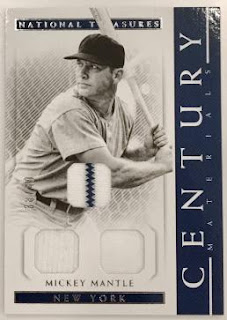 It is a New York Times bestseller, written back in 1985. Thirty-five years later, there isn't much new to add to Mantle's life. Mantle shows he is a product of his time, though; there's a lot here that might not be published in a book today.
at 10:00 AM