This post will show all of the Japanese bromide cards I have which I can not identify. This is intended to be a permanent post, updated as cards are added or subtracted.

Unless noted/displayed, all cards are single-sided. Players on bromides are much more difficult to identify than menkos, mainly due to a lack of text on several. And identifying the actual bromide sets are very difficult, as well. It's very likely that several of these have been identified already, but I was unable to match them to a particular set. As always, any help is welcome. 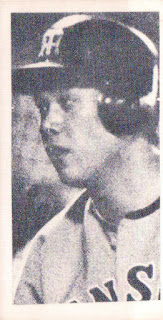 Card size: 2-21/32"H x 1-3/8"W. As you can tell from the scan, the image quality is very low; this might have been printed by a newspapaper! The card stock is actually thick paper with a glossy finish. There is no text anywhere on the card. The player is from the Hanshin Tigers, but I can't identify anything else. 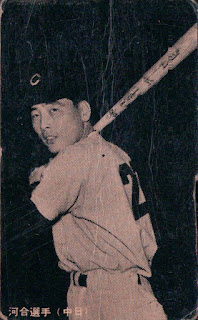 Card size: 3"H x 1-13/16"W. This bromide has a borderless black and white photo and is a little larger than tobacco menko-sized. The player's name (Kawai-player) and team name in parentheses is at the bottom in a somewhat handwritten style font. The player here is Yasuhiko Kawai, who played with the Dragons 1952-1958. This card is similar to JBR 16: 1956 Marumatsu Large B&W, in a borderless, smaller format; given the description for Kawai's card in the set, the photo might be the same. 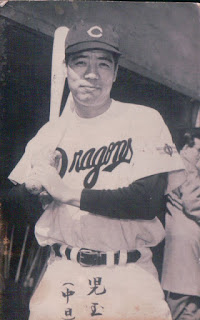 Card size: 3-1/32"H x 1-7/8"W. This card has a similar style to the three below, but is printed on a glossy stock that's slightly thinner. The player's name is somewhat larger than the team name in parentheses. This card could very well belong to JBR 29: 1956 Tobacco Menko Sized. The player is Toshikazu Kodama for the Dragons (1951-56); his family name is in the right text column, with the team name on the left. 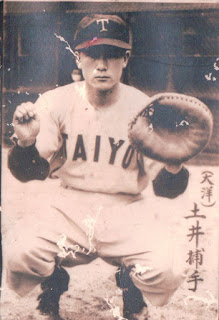 Card size: 2-16/16"H x 2"W. This card has a thicker paper stock with a slightly glossy front. The player is Kiyoshi Doi for the Taiyo Whales (1956-68). This black and white card is similar to JBR 18: 1957 Color Tobacco Menko Sized; no Whales are known for the set in an incomplete checklist. It also could come from JBR 29; Doi is listed in the checklist but "in catching gear". 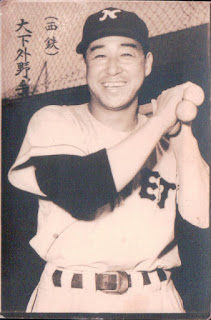 Card size: 3"H x 2"W. This card is printed on thicker paper stock with a slightly glossy front. The player's name and position are in the left column, with the team name in parentheses on the right. This card shows Hiroshi Ohshita with the Nishitetsu Lions (1952-59). 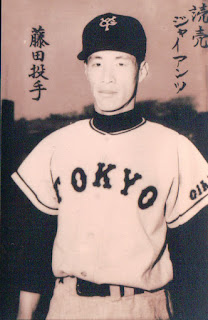 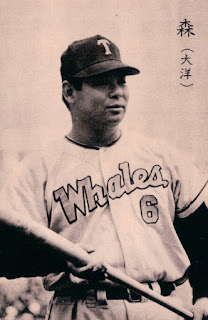 Card size: 4-3/16"H x 2-3/4"W. This is a slightly larger bromide, with the player's name, followed by the team name in parentheses in a single column. This card features Toru Mori while he was with the Taiyo Whales (1962-65). 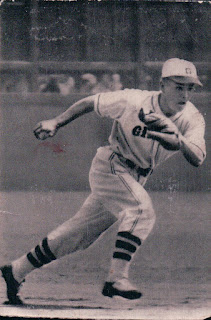 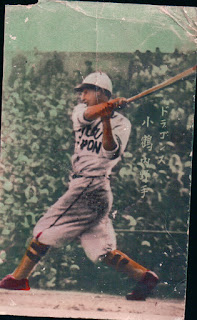 Card size: 4-3/4"H x 2-15/16"W. The card has a colorized photo with a green-tinted background. The team name is in the right column, with the player's name and position in the left. This is Makoto Kozuru, infielder with the Dragons. The card says "Dragons" in katakana for the team name, but his jersey says "Chubu Nippon" (Central Japan), which was used 1946-47. The team officially became the Dragons in 1947, and Kozuru moved to the Flyers in 1948, so this card was most likely issued 1947 or early 1948. 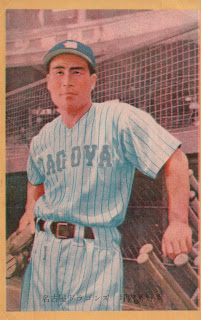 Card size: Approx. 5-1/2"H x 3-1/2"W. A colorized photo with a yellowish border; the bottom of the card has typed text with the team name, player name, and position. Translation: Nagoya Dragons / Tsubouchi Outfielder. Michinori Tsubouchi played with the Dragons 1949-1951. The uniform he is wearing was used 1950-51, so this card must have been issued aroud that time. Just as a side note, Tsubouchi's hat has the interlocking NC, for Nagoya Chunichi. Also, his jersey number appears on his pants just to the left and below his belt. 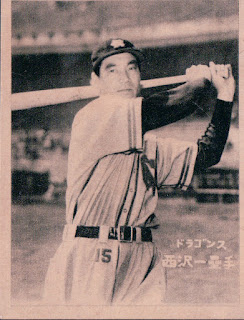 Card size: 4-1/16"H x 3-1/8"W. Team name is on the first line, with the player's last name and position below it in a larger font. Michio Nishizawa, first baseman for the Dragons (most likely 1949-1958). Given the font, this is very similar to JBR 41: 1950 Yamakatsu B&W. This might be a premium card issued with that or another Yamakatsu set issued around that time.

Card size: 3"H x 2-1/4"W. These six cards all appear to be from the same set. There is no text; the card fronts and backs are the same color card stock. The printing quality is pretty low. I haven't identified any of the players in this set. The top three cards feature Tigers in their home uniforms. The first card in the second row shows another Tigers player in a dark uniform, which apparently was used in 1948-49. The lower-center card features a Robins player in a grey uniform with stripes on either side of the buttons; this uniform was used in 1949. The hat also appears to have an R similar to the style they used that year; they would switch to a shield from 1950. Finally, the Hawks player on the bottom-right is wearing a jersey which was worn from 1949-50. Therefore, this set was most likely issued in 1949 or 1950. 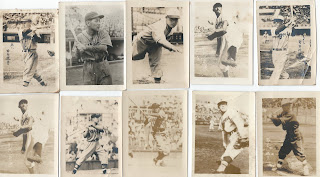 Card size: 3-1/8"H x 2-3/8"W. This group of 10 cards most likely come from the same manufacturer, but possibly three or more different issues. The sizes aren't exact, and cards would have been hand-cut from full-size sheets. They are printed on thicker paper stock/photo stock. A few cards have black text, team name is smaller to the upper left and includes position; a few have white text, team name is beneath the player name in parentheses; and a few have no text at all. All text is vertical. Card information (left to right, top to bottom):


It's possible these are a variation of JBR 75: 1948-49 Sepia w/Vertical Name & Team. Several of the image descriptions appear to match up, though the size does not. A few of the jerseys seem to match around 1951, but the original image quality is very poor so I could be wrong in my assessment.
at 10:00 AM