Continuing from yesterday's post, here are the other 16 cards found in the 1950s Kyoto sightseeing card pack. 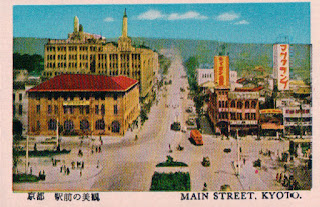 This image of the plaza and buildings in front of Kyoto Station is certainly dated. There are some nice historic structures here; the building in the foreground on the left is the old post office. That is now the location of Kyoto Tower, opened in 1964; the building it behind it has been replaced by a massive electronics shop, and all of the buildings on the right are now tall, modern skyscrapers. However, not far beyond the old post office is Higashi-Honganji Temple. 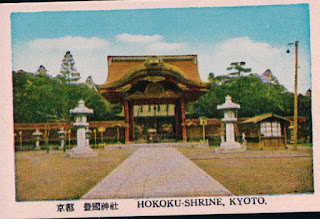 This shrine is normally called Toyokuni Shrine (Hokoku is an alternative reading of the kanji characters). It was built in 1599, closed soon thereafter, but restored in the 1860s. The karamon gate was built for a castle in 1598, moved a couple times, and finally found a home here in 1876. The shrine has a treasure hall; it's located next to the Kyoto National Museum. 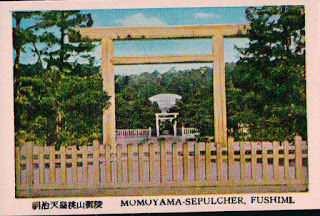 Fushimi Momoyama is a massive park which serves as the resting place for Emperor Meiji; the view above looks at his tomb (the rounded structure in the distance). Emperor Meiji brought great change to Japan, and as such was one of the most important emperors in history. 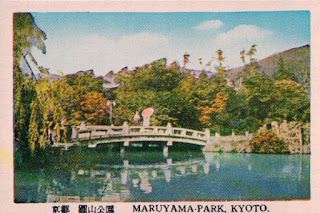 Maruyama Park isn't that big, nor is it special most of the year. However, during the cherry blossom season, the park is packed with photographers and groups holding hanami parties. Most famous is a large weeping cherry tree which is lit up at night. 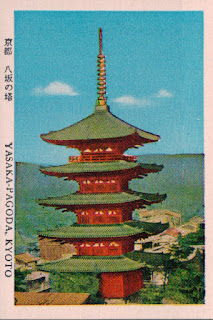 Hokanji Temple is long gone, but Yasaka Pagoda remains, and is visible throughout the Higashiyama District. It is one of the few pagodas which can be viewed from the inside, though it is open only occasionally. 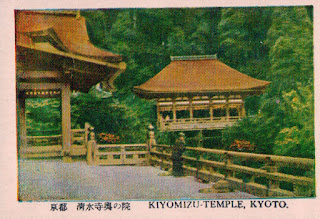 Also in Higashiyama is Kiyomizudera, which I've already talked about. But this photo shows what the temple is most known for - the wooden stage and surrounding paths behind the main temple. Additional structures can be found on the grounds, and make this temple more than just a photogenic stop on a tour. 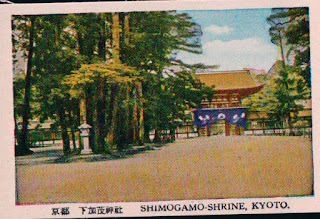 Despite being in the middle of a city, 2000-year-old Shimogamo-jinja is located in a small forest with trees which are up to 600 years old. The grounds are a beautiful, pleasant escape from the city streets, but aside from the Aoi Matsuri, in mid-May, the temple isn't extremely noteworthy. Kamigamo Shrine, a couple miles upriver, is known for sand cones built for purification rituals. 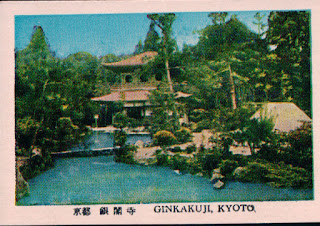 Literally "Silver Pavilion", Ginkakuji has no silver. Built in 1482, it was modeled after Kinkakuji as a retirement villa, but it was converted into a temple in 1490. The villa, and the art and culture it fostered, created a lot of what Kyoto and Japan is known for today. The grounds also have a pleasant walking path through a garden. 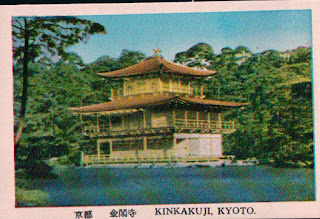 Compare that to Kinkakuji, which is the "Gold Pavilion". This temple is actually covered in gold, and is arguably the most famous temple in Japan. It became a temple in 1408 after serving as a retirement villa for a different shogun. The current building was constructed in 1955, as it has burnt down several times over the past 600 years. This temple also has a garden and a tea house. 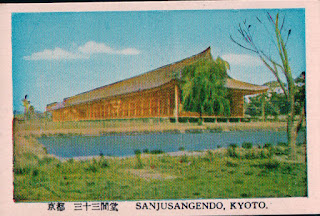 Also known as Rengeo-in, Sanjusangendo is famous for having 1001 statues of Kannon. Sanjusangendo means 33 intervals, and comes from the number of spaces between the support columns. It's a big structure, for sure, but the 1001 statues inside are more impressive. 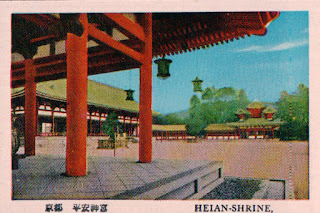 This card returns to Heian Shrine, this time with a view of the bell pavilion and the expansive grounds. 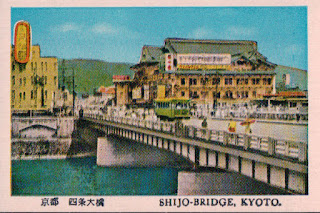 Shijo Dori is the main east-west street through the center of Kyoto; Shijo literally means Fourth Avenue. Yasaka Shrine sits at the eastern end, with Matsunoo Shrine at the west. If you've visited Gion, you've probably been on Shijo Dori's eastern end; after that it crosses Kamo River at Shijo Bridge. Shijo Bridge has existed in some form since 1142, except when it's been washed away. The very nondescript bridge you see here was built in 1942, and is more of a landmark due to its location than its design. 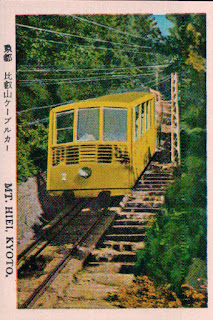 Enryakuji isn't a very popular tourist attraction, but it is a very important, historical temple. It is on Hieizan Mountain, and can be accessed via the cable car you see above. There are three areas to the temple, with two of the areas connected via a 20-minute walking trail; the third area is about four kilometers away and even less visited. 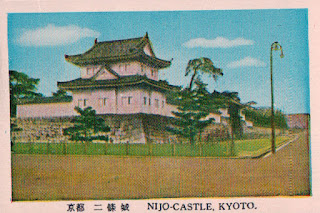 Built in 1603 for Tokugawa Ieyasu, it was used as a palace for awhile before becoming a historic tourist site and eventually a UNESCO world heritage site. The picture used for the card above shows the stone walls and protective tower; inside are a Chinese-style gate, a palace, and a garden. The original five-story castle keep is gone, as is another original palace, though a different residence was moved to replace the inner palace after an 18th century fire. 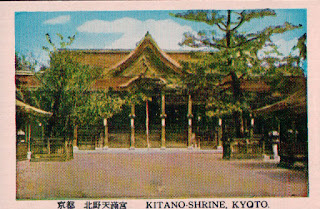 Kitano Tenmangu Shrine an important shrine for those who follow Sugawara Michizane. Tenjin is the god of education, so several visitors are students hoping for good grades. The grounds include a plum grove and several maple trees which make the spot popular in the fall, as well. It's also known for its monthly flea market on the 25th. 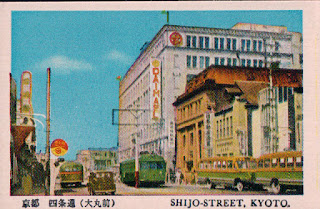 Finally, we finish on Shijo Street, which I mentioned above when talking about Shinjo Bridge. Continuing from the bridge to the west, several large department stores can be found even today. At Kawaramachi, there are a few pedestrian shopping arcades full of small shops selling everything from clothes to fresh food. A few of the buildings in the area may remain, but the whole street has essentially been rebuilt over the years with modern structures, and the sidewalks are all now covered.

And that wraps up this massive tour of Kyoto. As you can see, there are lots of historic places to visit; a fairly comprehensive first visit would take several days, and even just seeing the most important sights fully would take at least a couple days.

What was your favorite place seen here (including yesterday's post)? There are several places I want to return to explore more, but Ginkakuji is the place I enjoyed most.