One last book review from March. Seriously, I read four books and never wrote about them! Wally Yonamine: The Man Who Changed Japanese Baseball by Rob Fitts came to me through a Mercari purchase of all things. It's the first book by Fitts I've read, though I also have his book Mashi: Masanori Murakami, which I picked up when both Fitts and Murakami made an appearance in Tokyo a few years ago. He's written a few more books on Japanese baseball, collects Japanese baseball cards, and sells cards on eBay, too. (Not right now, due to stay-at-home orders. But usually.) 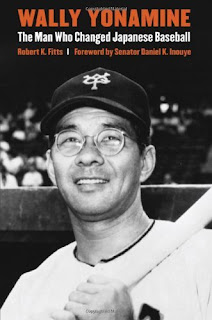 Wally Yonamine is a man of firsts: he was the first Japanese American to play in the NFL (for the San Francisco 49ers) and the first American to play baseball in Japan after World War II, for the Yomiuri Giants. He was the first foreign manager in NPB, with the Chunichi Dragons. He brought more-aggressive baseball to Japan, playing for the strongest, most popular team in Japan. He won countless awards and was inducted to the Japanese Baseball Hall of Fame in 1994 - the only American in the Hall as a player.

This book is the definitive record of Wally Yonamine's life. Fitts did his homework, interviewing players, friends, family members, and Yonamine himself. Fitts is most concerned with Wally's baseball career, but he also talks about his upbringing, his football career, Pearl Harbor, and stealing watermelons. We read about his efforts on the diamond and his relationships with his wife and children.

Overall, this book is extremely well-written. It is a passion project, that is obvious. My only minor complaint is the change in style in the last chapter, titled Hall of Fame. For the first 20 chapters of the book, Fitts talks about Yonamine as a third person, telling the story of his life. Chapter 21 continues that story, but this is the point where Yonamine enters Fitts' life, and the book turns first person for a while. And from history to praise. I only wish Fitts had split that chapter in two, talking about Yonamine's post-baseball life (which never really ended; he was involved with the Master League even in 2008, in his 80s) in a chapter, and sharing his personal story and Yonamine's legacy in an epilogue or afterword. It's still a great book. 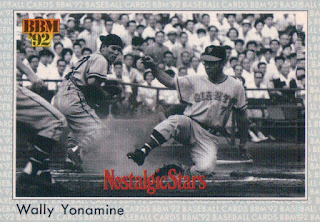 I have a few Yonamine cards laying around, but no definitive card. As I've been doing with other players I've read about, I'm on the lookout for a good card to represent the book. I've got my eyes on some vintage cards, but until then, here's a card of him sliding in to home.

And with that, I've gotten caught up on books. I haven't been reading these past couple weeks, so I have some catching up to do. My vacation starts tomorrow, so vacation #1 is traveling back in time over 100 years, again.