This post will show all of the Japanese menko cards I have which I can not identify. This is intended to be a permanent post, updated as cards are added or subtracted.

Card size: 2-3/4"H x 1-5/16"W (approx.) The first two are most likely from different series, though they have similar artwork and backs. The card on the left has a janken symbol in a circle and a math equation (78/5) in the bottom box. The middle kanji says "Nankai" which means the H on the player's hat probably stands for Hawks. The team didn't become the Hawks until 1947, but that doesn't help much with identifying a year.

The card on the right has a K on the player's hat and KS on his jersey. The back janken symbol is larger and not in a circle. There's an image of a baseball player with the katakana word "error" next to him; the math equation in the symbol is 3927+3. The kanji characters say Venus ("Kinsei"). The Kinsei Stars (KS) existed only 1947-48, before being acquired by Daiei and becoming the Daiei Stars.

Card size: 2-3/4"H x 1-5/16"W (approx.) The next two cards most likely come from the same set. The blue backs have "Nobuya" in katakana, most likely referring to the manufacturer. The left card player has an H on his hat, and it appears his jersey says "Nankai", a reference to the Nankai Hawks. The kanji says "yuushou", which means champion or championship.

The card on the right has a player wearing a hat with a "G", with the shirt text looking like "IN" in the middle. The back has the kanji for "Daiei", which first had a team in 1949, as mentioned above. They were the "Stars" until 1956, when they became the Unions for a season.The G on the hat could stand for "Gold" (the first character in Kinsei") which would then make his shirt most likely say "Kinsei". That is my best guess.

Assuming that the kanji on the front references the teams on the front, this most likely is a 1949 set. Daiei first had a team in 1949, and they could have used old artwork for "Kinsei"; additionally, the Hawks were the league champions in 1948.

Card size: 2-3/4"H x 1-5/16"W (approx.) As I'm writing about this card, I am just now noticing the kanji on the player's hat. This card is blank-backed. The character appears to be a catcher. The kanji on his hat says "Waseda", a reference to Waseda University. The katakana says "wase", since the university's name actually needs one more kanji to be "complete". 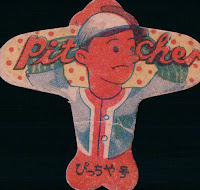 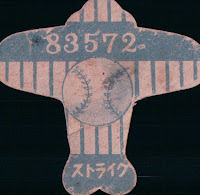 Card size: 2-1-8"H x 2-1/4"W (approx.) This airplane diecut card features a generic pitcher cartoon on the front, with hiragana which says "pitcher" at the bottom. The blue-ink back has a menko number and the katakana word "strike". 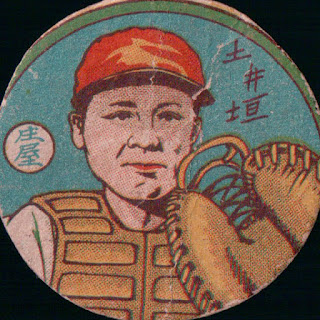 Card diameter: 1-7/8" This card features Takeshi Doigaki. His last name is on the upper-right side of the card. The left-hand mark is most likely pronounced "Seiya", and is probably the manufacturer symbol. No team name is visible; Doigaki played with the Tigers through 1949, before moving to Mainichi, Toei, and then Hankyu. 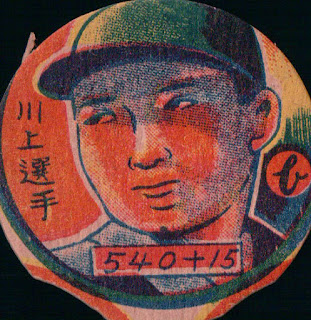 Card diameter: 1-7/8" Tetsuharu Kawakami played for the Yomiuri Giants 1938-1958, before eventually managing the team through 1974. My guess is the symbol on the left is a stylized G, though it looks more like a lowercase cursive b. The text on the left says Kawakami-player. The back is blank; the box in the middle has a math equation. 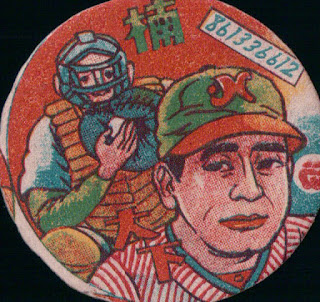 Card diameter: 1-15/16" This card has two players. There's a long menko number near the top, and a red janken symbol in a white circle on the right. The kanji at the top says Kusunoki, referencing the Giants catcher (Yasuo Kusunoki) in the background. The bottom says Ohshita, for the player in the front. I believe the logo on the hat to be a reference to the Nishitetsu Lions, which had a stylized N on their cap during his playing career; the Lions and Giants had a rivalry around that time as well. Given the logo on Ohshita's hat (playing for the Lions 1952-59), this card would be from 1952-1955, most likely 1952 or 1953, since Kusunoki really faded off starting in 1953. 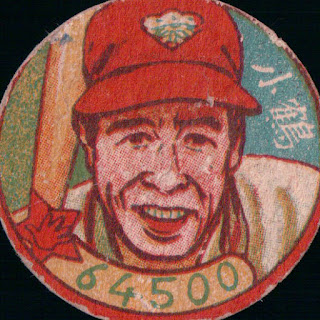 Card diameter: 1-7/8" The kanji on this card indicates this is Makoto Kozuru. There's a janken symbol inside a red star, with a menko number at the bottom. His hat logo most likely references his time with the Robins (1950-52). 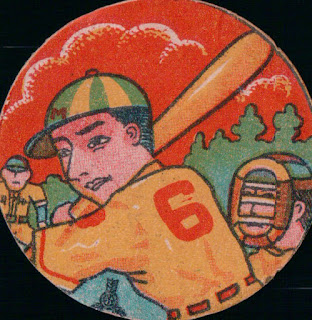 Card diameter: 2-1/16" This particular card probably doesn't reference a particular team. The card set could be based off of JRM 43: 1930 Red Sky, though that artwork uses smaller lines and has player names and menko numbers. I believe that is a manufacturer's symbol below the player's arm. His hat says "M", which might be Meiji University, though that is just speculation. 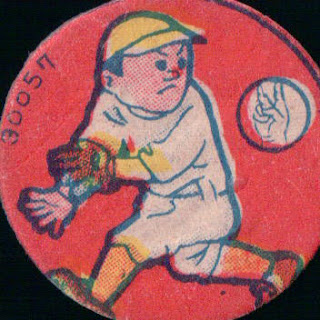 Card diameter: 1-1/2" This tiny menko has a cartoon player, a janken symbol in a white circle with a blue outline; the menko also appears to have a blue border. The menko number here is 30057. 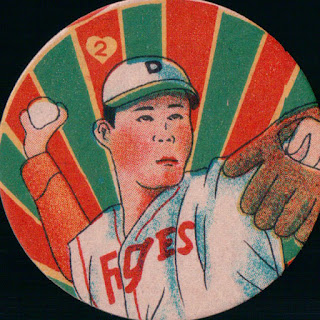 Card diameter: 2-1/4" This is very similar to JRM 3: 1949 Fan. The difference here is there is a playing card symbol and number at the top, and no team or player name. 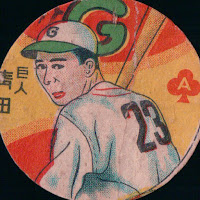 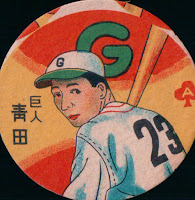 These two cards might seem the same, and they almost are. However, the card on the left has a diameter of about 1-7/8", while the one on the right is 2-1/2" across. The player is Noboru Aota, pictured here with the Giants. He played for Yomiuri 1948-52. There is a red playing card suit with a card number (Ace) inside. 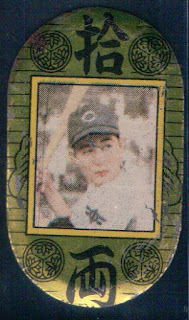 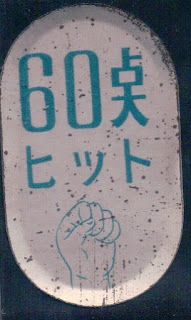 Card size: 1-5/8"H x 31/32"W. This card is made of metal, with a gold finish on front, and plain silver on back. The front has what appears to be a colorized photo and lots of design around it. The kanji says Juuryou, which is a reference to money - 10 ryo. The photo shows a Dragons player (I don't know who). The back has: 60 points, hit, and a janken symbol. The edges curl toward the back just a little. Another tin set came out in 1975, JCM 166 Jack Seika Metal Menko. The design is different but there are some similarities on the back. The Chunichi hat, plus sleeve patch, date this to the 1950s (1954-59). 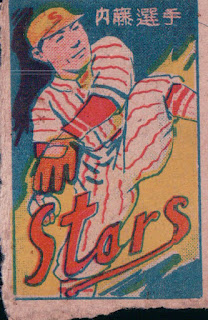 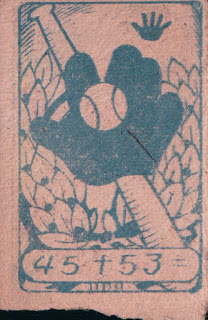 Card size: approx. 2-1/4"H x 1-1/2"W. The front features the team name in script, with the player's name at the top (Naito-player). This card features Kozo Naito. The back has a ball, in a glove, on a bat, over a laurel. There's a janken symbol at the top, and the menko number is a math equation at the bottom. The Kinsei Stars existed only from 1947-1948, limiting the period this card could have been issued. 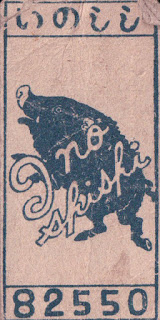 Card size: 2-3/4"H x 1-3/8"W.The front of the card has the team name at the top (Hanshin here), with the player's name in kanji on the right. His name is also in English across the image. The back has the name of a Japanese animal in hiragana at the top, and English script across an image of the animal. Inoshiki is a wild boar found throughout Japan. 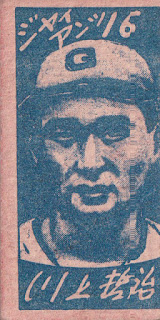 Card size: 2-13/16"H x 1-3/8"W. The front of the red-bordered card has only a portrait of the player, with no text. The blue back has the team name and jersey number at the top (Giants 16), followed by a monochrome copy of the front image. The bottom has an arced rectangle with the player's full name (Kawakami Tetsuharu). 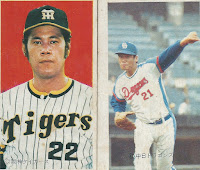 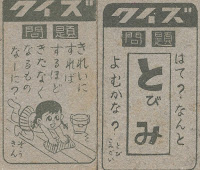