Should It End? Thoughts on 2020 Topps Gypsy Queen 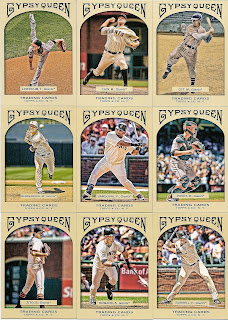 After a lackluster response to National Chicle in 2010, many dealers weren't interested in stockpiling the next throwback issue. This resulted in a fairly limited print run overall. 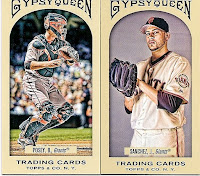 However, the set was an instant hit. Scarcity played a part in the release, but the set had a decent design. Many collectors turned away from the bright colors of Chicle, but Gypsy Queen had earthy tones with an authentic-looking grainy filter to the images. The minis looked good and came in a few parallels, and there were full-size unique framed parallels as well.

On-card autographs didn't hurt, either. Memorabilia cards look nice, and the checklists for hits showed a lot of star power. The inserts were themed appropriately, even though they were simple themes - future stars, home run hitters, great-fielding outfielders. A super-limited set had fictitional gypsy queens.

2011 Gypsy Queen had something for almost everyone, looked great, and was tough to find.

As the years have gone by, the set has kept the same basic formula - minis, hits, and a few insert sets. But in recent years, Topps has been making the same changes as their other sets - image variations, an increase in gimmicky parallels, and arguably a less-appealing lineup for the hits.

What I really loved about early Gypsy Queen sets were the inserts. The gypsies only appeared in 2011 and 2012, but topical inserts lasted through 2016. In fact, the only insert set I haven't finished is the Basics of Baseball mini set, which is one of the best insert sets found in Gypsy Queen. 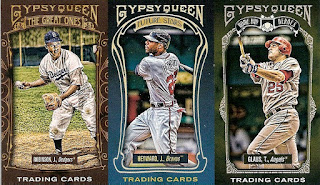 Do you remember that 2011 Gypsy Queen had mini versions of their inserts?

In 2017, Gypsy Queen moved away from inserts themed to the type of players in them. That was the first year of the Fortune Tellers, which are interesting but not themed. Now, there are Tarot of the Diamond, too. Nice... not themed.

So what are we left with in 2020? The tenth version of a throwback set, with none of the fun pieces that made 2011 so appealing.

I argue that Gypsy Queen has reached the end of its shelf life. Allen & Ginter will hit 15 this year, but A&G has variety - unique subjects found in the base set and inserts.

I like the GQ design enough, but it feels so uninspired after ten years of the same thing. Topps would need to go back to fun themed inserts to change my mind. You can keep Fortune Teller and Tarot, but bring back sets like Sticky Fingers and Moonshots.

Or retire the design and start new with another throwback design. (Yes, A&G's design is getting tiring, too; Topps could port this concept to a different old multi-sport set starting next year.)

I just know that I'm bored with Gypsy Queen. Even Cardboard Connection doesn't know what to say about it. "Take another retro-inspired cardboard journey with MLB stars";  "Keeping to the standard format...". Yawn.

What do you think? Should this be the end of Gypsy Queen?