Like my other similar posts, this is intended to be a permanent, updated list of cards I have which I can't identify, because they are uncatalogued and I can't identify them on my own. 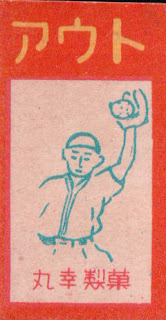 Card size: 1-9/16"H x 7/8"W. This very small card must have come from a game; it doesn't feature any particular player. The text at the top says "Out", at the bottom it says "Maruko Confectionery". The company still appears to exist in Gifu Prefecture, not too far from Nagoya. It appears they make supplies rather than consumer products now. 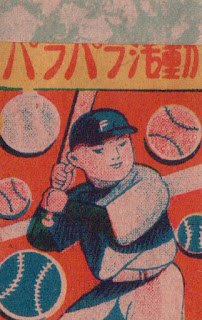 Book size: 2-1/8"H x 1-3/8"W. Another souvenir that doesn't match to any particular team or player, though this one has an F on his cap. That could be a reference to a manufacturer. You're actually seeing the front of a flip book with 10 pages that show a pitcher throwing to a batter, with the batter hitting a home run on the last page. Reading the text at the top is difficult due to the binding over the "spine". From what I can tell, it says Puff Puff Activity. (The first kanji character is the one I can't properly translate. The second kanji means motion.) There is a little color on the inside pages, but they're mostly outline drawings. The first page inside also has bubble-letter style text which I believe translates as Start of the Game. 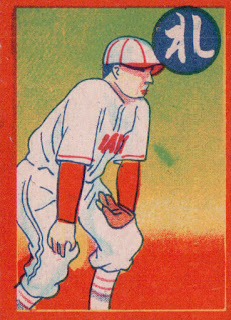 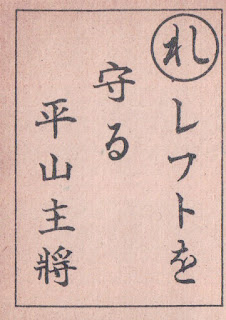 Card size: Approx. 2-3/8"H x 1-11/16"W. This is a pair of karuta game cards. The reading card (right) says: Captain Hirayama defending left (field). This could be a reference to Satoshi Hirayama of the Carp, and the image does show a red-jersey'd player, possibly with an A as the second character on his jersey. The character inside the circle on both cards is a stylized/script form of hiragana "re" (refuto - left). 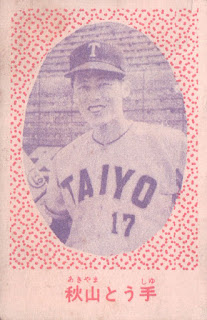 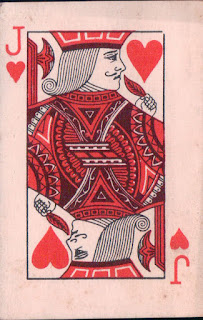 Card size: 2-3/4"H x 1-25/32"W. This card has a distinctive red border around the black and white photograph. The player's name in kanji with rubicon (small hiragana reading character), position in hiragana, and "player" in kanji with rubicon are at the bottom. The back is a card from a playing card deck. Noboru Akiyama was a pitcher with the Taiyo Whales 1956-1967. The design is similar to others issued by Elementary School magazines in the early to mid 1960s. 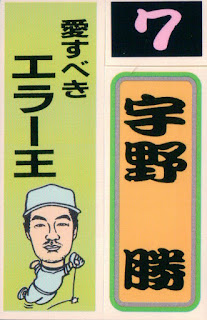 Sticker size: Approx. 2-3/4"H x 1-3/4"W. Plain yellow back. This small sheet contains three smaller stickers. The top one represents a jersey number. The kanji nameplate on the right says Masaru Uno (Uno Masaru top to bottom). The text above the caricature says "Loveable Error King".Uno wore #7 with the Dragons 1979-1992, so this sticker was probably sold at Dragons games during the 1980s. I've seen similar stickers sold through gacha-gacha machines or given away with other snack purchases at stadiums. 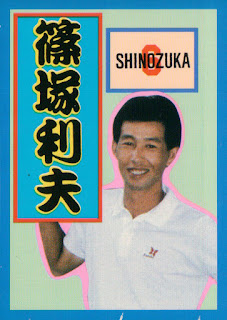 Sticker size: 3-3/8"H x 2-3/8"W. Plain yellow back. The kanji in the box says "Shinozuka Toshio". His last name in English characters and jersey number are in the box above his head. Kazunori "Toshio" Shinozuka played for the Yomiuri Giants 1976-1994; this sticker was probably issued in the mid-1980s when he was a superstar. I'm not sure if the logo on his polo shirt is relevant.

Sticker size: 4-1/8"H x 2-1/8"W. Plain yellow backs. These nine sticker sheets contain a random assortment of players; some stickers are square/rectangular, some round, others are die-cut, and all of different sizes. No sheet seems to exclusively have only one team on it, though the Yomiuri Giants feature prominently overall. I'm guessing these were sold through snack shops or toy shops in hanging taba packs, and are probably unlicensed, like most cards/stickers/etc issued before 1990.

Card size: postcard (approx. 5-7/8"H x 3-7/8"W).The pure card fronts feature Giants pitchers with facsimile autographs.The backs contain the Yomiuri Giants logo in the stamp box, above the zip code box it says "post card". The bottom text includes the player's name in a descriptive sentence (strong pitch, ace pitcher Horiuchi is alive, for example). The card on the left is Hisao Niura (1968-1983); the right is Tsuneo Horiuchi (1966-83), both with the Giants. These are very similar to JY 13: 1976 Yamakatsu JY 1a Premiums, meaning these might have been other premiums/prizes for Yamakatsu issues.

Card size: 3-5/8"H x 5-5/8"W. This is a true vintage postcard with a team photo for the Yokohama Shoko Team. Japanese text is written right to left on this card. The white box at the top says in English: Yokohama Chamber of Commerce Training Team. Team members are individually named; two pitchers (standing, no jerseys) and a catcher (standing far left) are also named by position. Yokohama Shoko was a high school team; they have a new name now. It appears that the school opened with this name in 1958; it became Yokohama Sogakukan High School in 2003. Despite having a team postcard, they apparently have never been to the Koshien tournament. They do have a good team, though - eight members over the years have gone on to play in the NPB. (It is possible they participated in Koshien back in the 1960s or 1970s, when this postcard was most likely produced, but the information isn't readily available.) 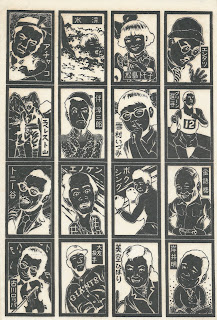 Sheet size: Approx. 10"H x 6-3/4"W. Individual frame (ignoring white borders): 2-3/8"H x 1-1/2"W. Black ink on very thin tissue paper. These 16 images depict various sports stars, celebrities, and sports activities. For example, the hiker (second row left) says "Mount Everest" in Japanese. There is one baseball image, on the bottom row, second from the left. It clearly depicts a Yomiuri Giants player, with the text reading Otomo-pitcher. Takumi Otomo played for the Giants 1949-1959, though this sheet could have been produced well after that. Given the style, however, it matches menko styles which were popular in the 1950s, 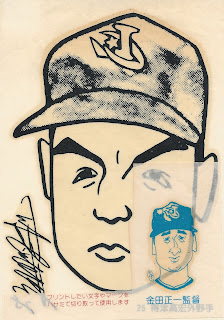 Large transfer size: Approx. 7"H x 5"W. Small transfer size: approx. 2-1/2" x 1-1/2". I don't recall where or when I found these, but they have been stuck together since the time I purchased them. They feature two Lotte Orions players. I'm not sure how or where they were intended to be transferred.

Large transfer: Black ink, face only with a facsimile signature, printed in reverse. Text is forward-facing in the lower-right corner, and includes player's jersey number, full name, and position. 25 Takahiro Tokutsu, outfielder. He played with the Orions 1967-1982.

Small transfer: Blue ink, bust image. A small logo/manufacturer's mark appears to be to the left of his head. The caricature is printed in mirror image, but again the text at the bottom is not. Red text to the left gives information on transfering (cut out the part you want to transfer). The blue text says the player's name and position: Masaichi Kaneda, manager. He managed the Orions 1973-78 and 1990-91, though he is much more well-known as a pitcher, holding all-time records in several categories. 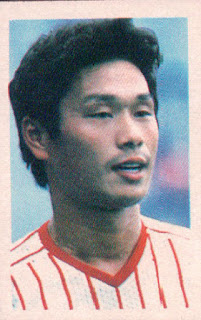 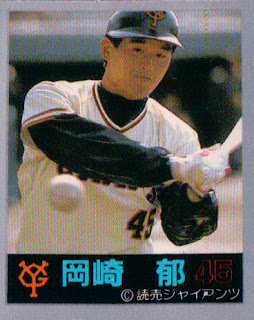