It's not just any checklist... (Plus, Alanta I need your help) 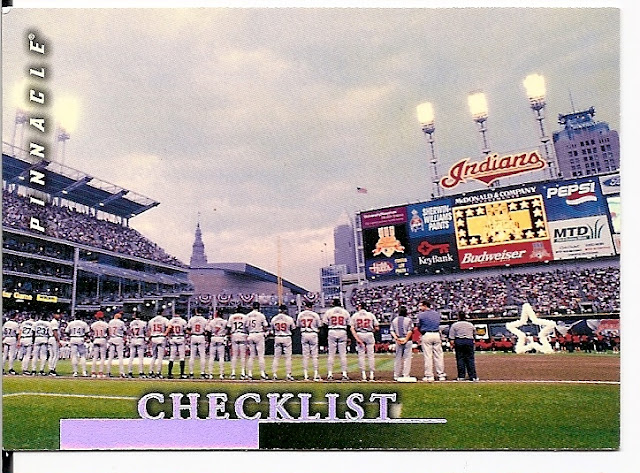 First, a quick request: dayf announced the Freedom Cardboard show is this weekend and Otis Nixon is signing. I've wanted his autograph for a long time and it's free, so if you're going i'd love to work out a trade - card, ball, photo are all good. Now to the post...

I can't say enough great things about the 1998 Pinnacle set. Look at the beautiful photography here, with all the NL all-stars lined up along the first base line. There sure seem to be a lot of Braves jerseys in there - you can thank Bobby Cox and the NL Champion Braves for that. Chipper is easily discernible with his number 10 and black socks. Eventually I will bother putting this set together, but for now, I pick up great cards here and there. I have an excuse for this one - since it features the stadium so prominently, I can use it in my awards/leaders collection to honor the Indians streak of 455 consecutive sellout games - that's nearly six years of full seats. The record was set in 2001 when the Indians finally had some empty seats, and it was passed in 2008 by Fenway Park - their streak currently sits at over 700 games. But with a rabid fan base, a classic park that tourists travel the world to see, and a small number of seats to appease the demand, it's easy to see why the Red Sox hold the current record. The Sox streak started in 2003, and certainly hasn't been hurt by the postseason push the team makes every year; Cleveland saw a similar surge when their streak started in 1995. Remember when the Indians were World Series-worthy?

Can anyone identify all the jerseys there without looking at a roster?

A quick pimp for the bottom of the post: Derek of Tomahawk Chopping is doing a $15 trade draft, which gets you 25 inserts/parallels plus two hits. Not a bad deal if you ask me! I'm in. Are you?
at 3:00 PM