Some of the best sets to be released, as far as the photographic quality is concerned, came from the late-90's Pinnacle and Zenith issues. It seems like the company spent most of its time in the 1990s making random foil and limited/serial-numbered issues without really focusing on quality photographs and photo-first designs. But eventually - maybe a little too late - the company realized that Upper Deck was getting all the recognition for its beautiful base cards. I think Pinnacle ended up with way too many great photos, because in 1998 it issued packs of "team snapshots." 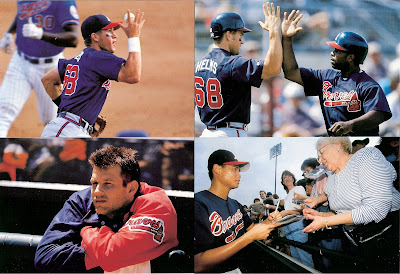 The photos aren't all action-oriented, but they're still beautiful. The whole idea was to show the players in candid situations, rather than the typical posed studio images or standard action shots. Each photo is 4x6, and the backs are essentially blank - set/manufacturer identifying information is printed similar to the way the Kodak logo is printed across the back of photos. The photos really show off the vibrant, bright, colorful imagery seen in 1998 Zenith. Looking at the jerseys, it seems that the photos might have been all taken on the same day - or at least taken on Sundays, as the Braves sport their alternate Sunday jerseys in all the pictures here. 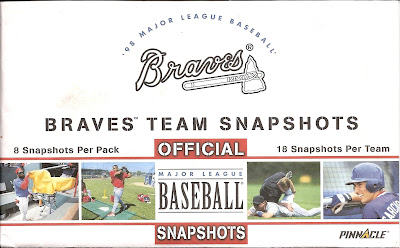 As you can see from the pack wrapper, each envelope (again made similar to photo envelopes) comes with 8 of 18 snapshots, and are team-specific. Theoretically, one would only need three packs to complete a team set.

I picked this pack up in August for a dollar, and I wish I had bought more, as it is a great set, as far as photography is concerned. I kept one of the snapshots for my collection, but the other seven are for trade. I don't remember who they are - you can see four of them above - but I'd like to trade them all as a package deal. If I come across a bunch more, I may try to assemble a master set.
at 3:00 AM