Everybody must get (Steve) Stoned!

In case you don't get the topic title... 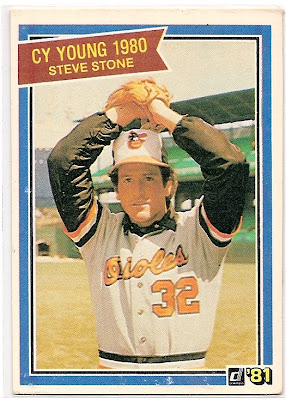 Steve Stone was a decent pitcher in the 1970s, striking out a good number of batters and keeping hits down, and as a result had a pretty good career. In 1980, he changed his philosophy and pitched to win, using his curveball as his main pitch. It worked - he went 25-7, with a 3.23 ERA and 149 strikeouts. That was good enough to win the Cy Young Award that inspired this card, although his dependence upon curveballs ruined his arm. He retired after the 1981 season, but went on to be a Cubs broadcaster, and he is now a commentator with the White Sox.

You may remember this from 2010 (good stuff starts about 2:10 in):
And here's Steve's response (I wish people would capture video instead of recording their TVs with their cell phones):
And here's something kinda funny from the whole thing:

A quick pimp for the bottom of the post: Derek of Tomahawk Chopping is doing a $15 trade draft, which gets you 25 inserts/parallels plus two hits. Not a bad deal if you ask me! I'm in. Are you?
at 3:00 PM