I shouldn't focus my efforts on older sets, with so many recent sets still a part of my want lists. However, opportunities arise during the course of everyday collecting that causes me to start building another set. In the case of these 1974 Topps cards, I picked up a lot of singles at a card show a couple months ago. Well, it's only 44 cards, so I did the truly lazy thing and went straight to Sportlots to grab the rest. The last few cards - the key cards in the set - arrived last week. I was surprised to find them for a bargain from a single seller, and in fact I paid less per card for these keys than I did for a few of the commons/semistars. 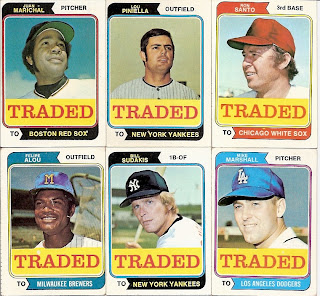 Okay, so it's not a 660-card "real" set. The book value is less than five individual cards in the regular 1974 issue. But it's the oldest complete set I now own, and it has its place in history as the first "traded" set released by Topps. (I will agree with Night Owl that the 1981 Traded set is the first real traded set release.)

Thanks to Matthew, I've started the 1973 Topps set - a real vintage set to build. I'm about 12% complete, mostly from Matthew, but also from a few cards I picked up at card shows. I should have been hoarding cheap vintage for years, but it wasn't until the past few months that I started grabbing what I can. I've got a decent handful of singles from other years which I have now cataloged, but I think 1973 will be my first focus.

But set building isn't all I do. It's a tiny part of what I do - I focus mostly on the type collection. So here are a couple tinted hits from the quickly-forgotten Heritage Minor Leagues issue. 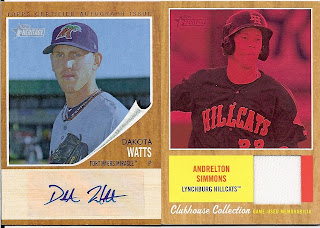 As far as releases go, it's fairly simple. There are tint parallels for the base cards, autographs, and relics, plus the Bryce Harper relic and its parallel. That's it! I need plenty of the parallels, but it's not as tough to build as most of the other issues this year.

Plus, I have my Geoff Geary collection (story here, list here). 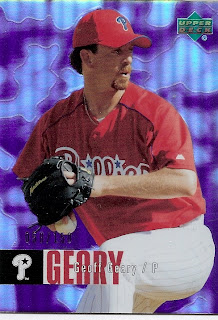 This purple parallel brings me to 65% of non-plate cards. I believe there are a few more team issues I don't know about, including minor league cards. I'll make another major push in a month or two to locate these cards and add them to my collection.

Now, back to the type collection, with this gold parallel from last year's Bowman Sterling. 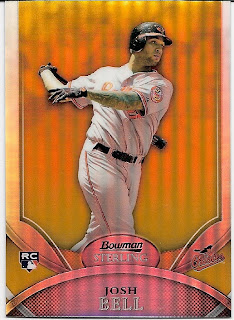 I was too busy to collect cards for most of 2010, and Sterling was almost completely ignored. This gold parallel is one of hundreds of cards I need from last year!

But I wouldn't have bought the Josh Bell if it wasn't for this card: 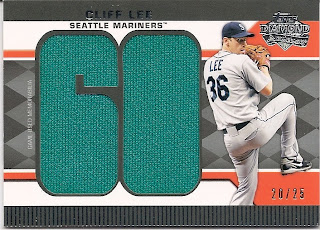 Now that's a relic card. This Cliff Lee jumbo relic is numbered 20/25 and comes from the flagship Topps release. Not only is it a really tough pull (okay, I got it off eBay), but it's a nice colored relic, instead of a boring gray or white piece. While it's "just another card" for the type collection, I'm really glad when I'm able to pick up these rare cards. They add a little quality to the quantity of the type collection!

For those of you who survived through this post, I leave you with 15 seconds of hilarity. Seriously, I laughed for at least two minutes after watching this video:
Even Beyonce is laughing. Watch it again, you'll see.
at 3:00 PM