Each card will present a stadium or other baseball landmark I've visited. This is card number five in the series... 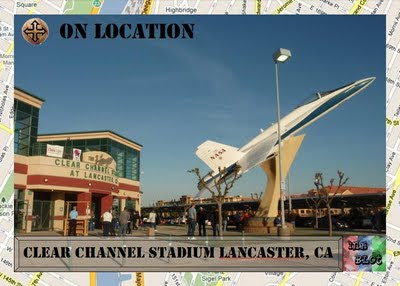 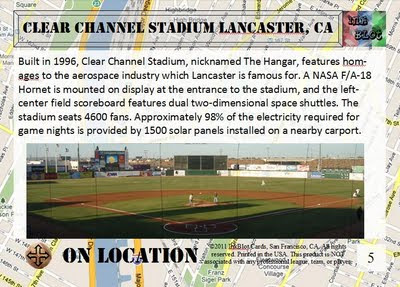 Continuing the tour of Southern California professional stadiums, we move to the north side of the Los Angeles area to Clear Channel Stadium, home of the JetHawks. Lancaster sits at the west edge of the Mohave desert, and like Adelanto it sees a good bit of wind. This plays a big factor in stadium comfort. If you recall, Stater Bros. Stadium in Adelanto is a fairly open stadium. Clear Channel Stadium is the opposite, with a fairly enclosed concourse, sitting between the seating bowl and concessions. The wind whips through the concourse, turning it into a wind tunnel suitable for testing by the nearby aerospace companies. The cold desert nights can become quite unbearable because of this. The seating bowl isn't as affected by the wind. I believe if small concessions or other "walls" were built at strategic points on either side of the concourse the wind could be controlled. 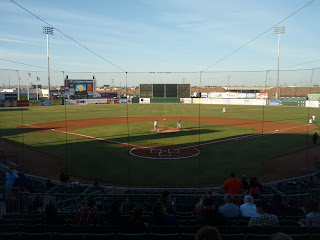 The stadium itself looks very nice, especially given that it's 20 years old (as are most of the minor league stadiums in the LA area). The mounted plane and space shuttle video scoreboard are a nice nod to the area that adds uniqueness to an otherwise fairly standard stadium. Being in the desert means there isn't much to look at beyond the stadium, but at least there aren't heavy electrical wires running across the background in this park. 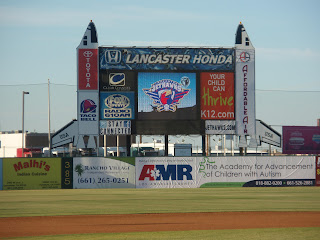 Early in the game, they made an announcement advertising a special food item for one homestand only, which was called the Heart Stopper. You can read about it here. I just had to have one, and I have to say it's probably the best ballpark food I've ever had. Maybe not everyone's cup of tea, but I will have to find someone else to recreate this again. However, this is where my gripe comes - this item was served at only one concession stand, and the line was quite long. I missed two full long innings waiting in line for my heart attack in a tray. This is unacceptable, especially since there was a concession window right next to it serving ice cream or smoothies or something else cold, with five employees standing around with nothing to do. And this was on a slow night - I'd hate to go to a Friday or Saturday night game and try to get something to eat. 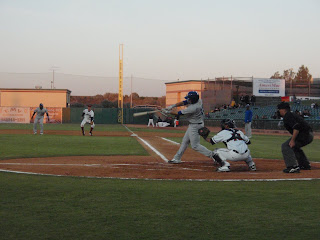 The JetHawks were the most impressive California League team I've seen yet this year. They're an affiliate of the Astros. I managed to obtain a cracked bat from Jose Altuve at a different game (his average has dropped from about .500 to .387 now), who did pretty well in the field and had a great on-field approach. The shortstop Jonathan Villar may have a team-leading 9 errors already but he and the third baseman made some major league-level plays in the two games in which I saw them.
at 9:25 PM