Have you voted on my poll yet? It's located on the left side of this page! If you don't vote, your voice can't be heard!
As I wrote on Friday, it was so nice to go to a card show where I could spend time finding a bunch of cards at a bargain. Not everything was cheap, but I stuck with the values and kept my mind in the game. My first goal was to find some 2011 Bowman. This wasn't top priority for me, but with the speculators snatching up everything black and red at the stores before I could grab a blaster, I figured I could get my sampler cards at the show. Since everybody's looking for His Royal Bryceness, I figured I could find some of the scrubs at a good price. I saw one dealer selling the $19.99 blasters for $35 each, and the sealed box guy had the hobby boxes and jumbos well beyond anything I wanted to pay. But I came across two dealers with singles. One of them wanted about a buck a card for no-name crap, and the other was getting rid of a ton pretty cheap - I got them as a bulk deal with a bunch of other stuff you'll see in future posts.
So for the New Hotness, what did I find? 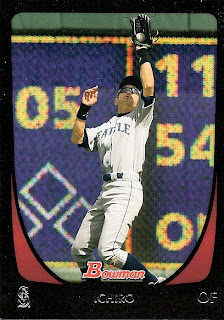 Plenty of base cards. Ichiro goes into the sampler, but I also grabbed base cards of Kershaw, Heyward, Jeter, McCann, and Pujols. I know where Kershaw's headed, the other guys are for trade. 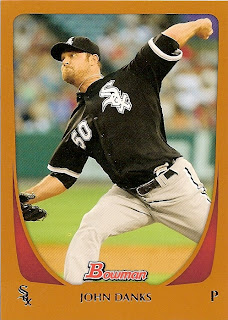 Danks for nothing! Well, nearly nothing. Orange parallel, numbered 158/250. He's a sampler, but I also picked up Jacoby Ellsbury 041/250 for trade. 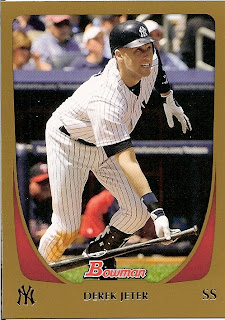 Derek Jeter gold. He's a sampler, too, and the only gold I picked up, for some reason. Maybe because it's not numbered. 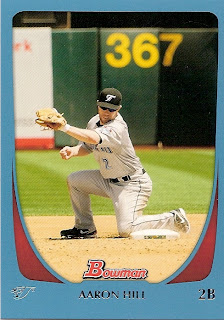 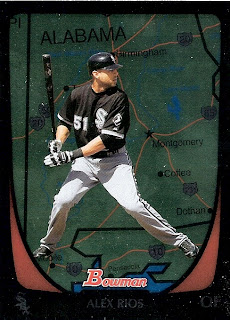 His name is Rios and he dances in Alabam'... International... or just National parallel. I have for trade: David Wright, Carlos Gonzalez, Robinson Cano, and Kershaw and Ethier, but those two are basically already going south. 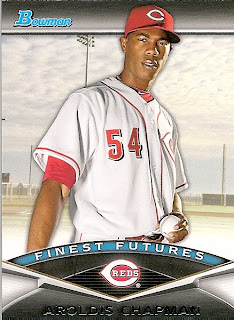 I've seen the Futures, and ... they're the Finest yet? Shouldn't this insert be in, say, Finest? These are the only inserts I saw available at the show, because they feature players who already hit the bigs. I have for trade a Fidel Starlight Starlin Castro and Troy Tulowitzki.

No other inserts were to be found, and prospects were nearly invisible. I grabbed one Chrome prospect (not scanned) of Corey Jones. The dealer with this card wanted a buck each - I said a quarter and managed to get him anyway.

I'm willing to trade any of the cards mentioned above for cards from insert sets and such I don't have or aren't in a pending trade. Let me know! The list of what I have and what is a pending trade is located on this page. I really need chrome, refractor, and prospect (including chrome/refractor) cards.

And after all that, what are my thoughts on the 2011 Bowman set? It's exactly what I thought it would be. The designs are so similar over the past few years that I have to really pay attention to ensure I'm buying cards from the right year. It all comes down to the prospects in the set, and that's not my thing. So I'll pick up my samples and move right along.
at 2:59 PM