Today, I'm going to tell you all about a couple trades I made recently. First, Larry at Emerald City Diamond Gems contacted me about a few of my Mariners cards from the March break I participated in at Cardboard Collections. I sent him a bunch of Mariners, and he sent back a bunch of other Mariners: 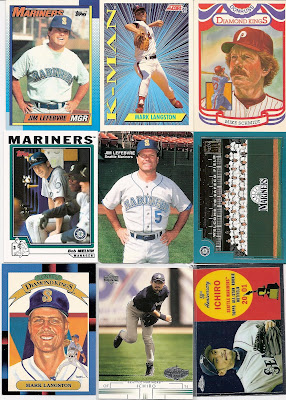 Overall, he sent 18 cards, almost all of which go with the Awards/Leaders collection. I think the Mothers Cookies card in the middle is heading over to the samplers, though - I don't see a lot of those. And Mike Schmidt in the top right finishes my '84 Donruss Diamond Kings set! This means I'm complete on DKs through 1992. Thanks a lot, Larry!

I sent Scott Crawford some Jackie Robinsons, and he sent some nice oddballs for my sampler collection: 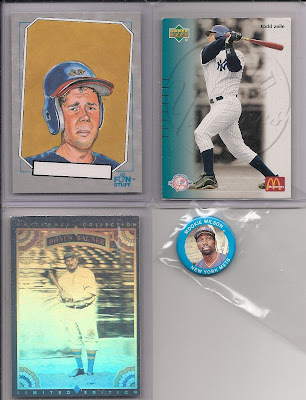 There's a 1992 Confex Baseball Enquirer card which probably won't be on the lists anywhere (since it's not MLB/MLBPA licensed), a McDonalds Yankees team issue from 2003, 1992 Whitehall Collection Honus Wagner hologram, and a 1984 Fun Foods pin! It's always good to find cards like these, because they rarely leave the area in which they're issued. Thanks, Scott!
at 2:18 PM