Earlier this week, several packages landed in the mail bin at the same time. This caught me by surprise, mainly because I forgot all about mostly everything that was headed my way. That included:

Three cards to finish the most insane set I've ever put together! 2006 Upper Deck: done. 1250 cards in three series with SPs in the third. As a note, if you're looking for a nice lot of series 3 cards (pretty much no SPs included) maybe we can work out a trade. 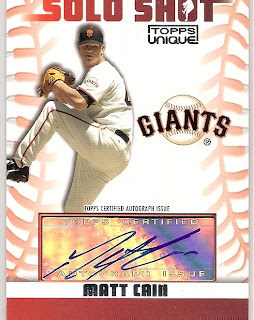 And this card came a good bit faster than I expected. It's from 2009 Topps Unique, but I ended up with a redemption code about a month ago, and the expected delivery date was in July. It's nice to have this autograph so fast! Sure, it's just Matt Cain, but he fits in with my Giants autograph team set.